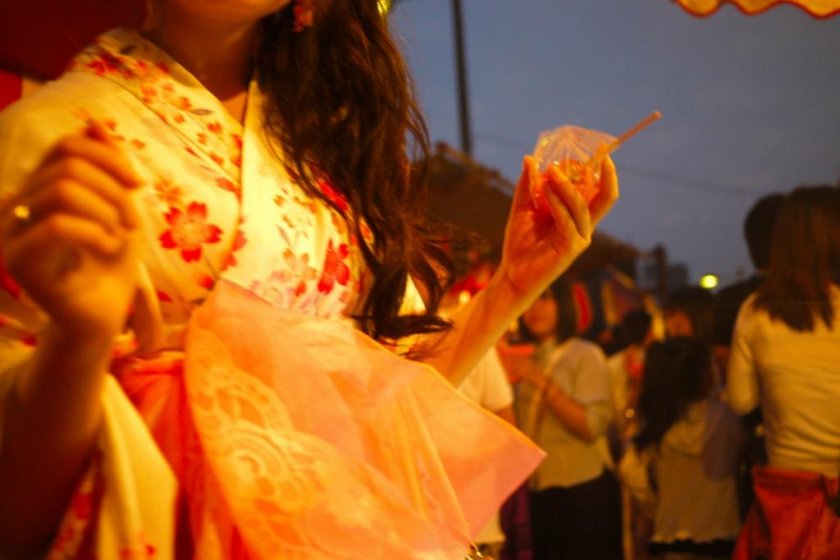 Said to have begun over 400 years ago, Tōkasan signals the start of summer. It has come to be known as yukata festival as locals take this early opportunity to give their colorful yukata summer kimono their first airing of the year. Indeed, although the focus of the festival is meant to be Enryu-ji Temple, located at the Peace Boulevard end of Chuo-dori, it is really the opportunity to stroll around in yukata and admire everyone else's yukata that is the big draw.

Perhaps it is because while the weather is warm, the temperatures are not yet soul-sapping high, or because festival-goers are well aware that before the arrival of summer proper, the sticky humid rainy season must be endured, but everyone always seems to be in a great mood at Tōkasan; it is, I think, Hiroshima’s most festive festival.

Almost a quarter of the 450,000 people who visit the festival every year do pay their respects at Enryu-ji Temple, a mixed Buddhist and Shinto temple/shrine dedicated to the god of rice Inari (the characters for which can also be read "tō​ka" - hence the name of the festival). The temple is adorned with scores of red lanterns and there is a long line throughout the festival as people wait their turn to wish for good luck and purchase fortunes or the specialty Tōkasan yakuyoke uchiwa fans that are said to ward off evil.

Once luck has been prayed for and evil warded off, it’s time to get on with the serious business of festival-going. The main Chuo-dori street and a good section of Peace Boulevard are lined with stalls, as are the narrow streets that border on the city’s entertainment district. On offer are the usual cornucopia of festival foods and drinks, games such as goldfish scooping, and the chance to purchase strange inflatable novelties. One word of advice, although the haunted house on Peace Boulevard looks pretty cool from the outside, the only thing that shocks those tempted to enter is the audacity of the high admission fee.

The main Chuo-dori street is usually closed to traffic on Friday and Saturday nights from 7 pm to 10 pm, though for much of that time the street is mostly taken up by parades, taiko drumming, kagura, and choreographed dance performances. If things get too much for you, we highly recommend ducking into Shintenchi-koen Park where the local neighborhood association does a great job of recreating the atmosphere of a neighborhood summer Bon dance festival from days gone by.

Between 19:00 and 21:30, classic Japanese pop songs crackle out of a PA on a central tower decorated with lanterns and street stalls sell festival treats like popcorn, cotton candy, and ramune sodas at fantastic prices. It's a good place to enjoy the festival if you have small children and the locals are more than happy if visitors join in the dancing, even if they make up the moves as they go along! 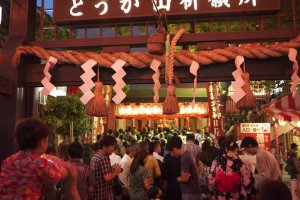 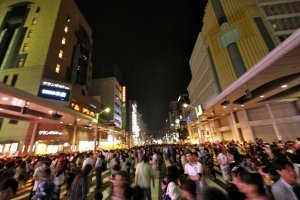