Each year in April, the Inashiki Tulip Festival is held at Ibaraki's Wada Park. Located on the shores of Lake Kasumigaura (Japan's second largest lake), the park showcases a range of tulip varieties in various hues, offering some truly spectacular scenery.

Along with the beautiful flowers to enjoy during the blooming season, Wada Park also has barbecue facilities, cycling paths, and plenty of wide open space, making it a perfect spot for a family-friendly day out.

Do note that the festival dates are subject to change depending on blooming conditions, so it's advisable to check the official event website closer to April.

Inashiki's Wada Park is located around 20 minutes by taxi from Sawara Station, served by the JR Narita Line and the JR Kashima Line.

For those who plan to drive, the park is around 30 minutes from the Ken-Ō Expressway's Inashiki IC, or roughly the same amount of time from the Higashi Kanto Expressway's Daiei IC. Free parking is available at the venue, but it can often fill up quickly during tulip season. 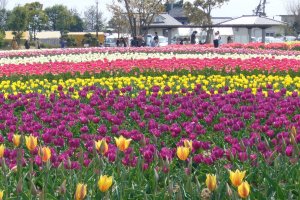