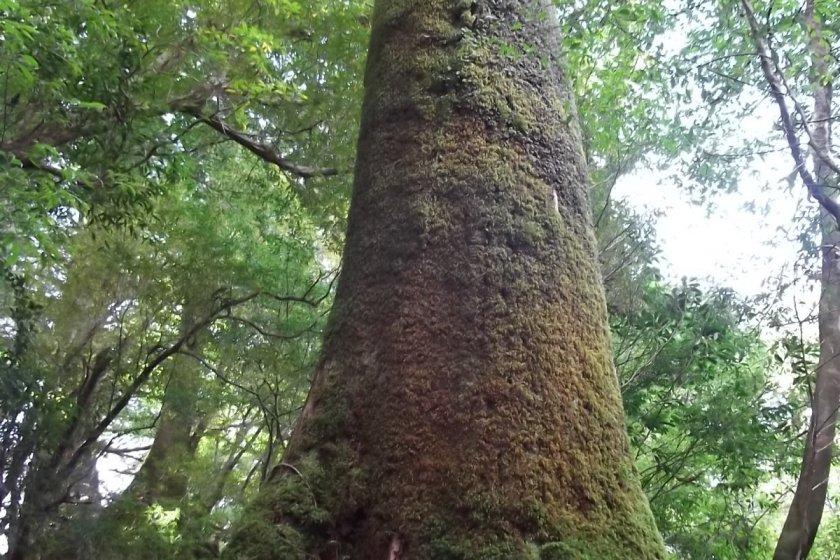 Immerse yourself in the untouched ancient forest

Moss slowly taking over a tree

Yakushima is famed for the venerable cedar trees in its forests, some of them upwards of 5000 years old. However, it's a challenging ten-hour round hike to get to the very oldest, and not everyone has the time, energy or stamina. Yakusugi Land is the name for a zone of the forest with a set of trails that does a good job of making the forest and some worthy old trees accessible to everyone, of whatever fitness level.

If you don't have your own transportation, there are a couple of buses a day from Gochomae, with connections from Miyanoura, Anbo and other points around the coast; the information office at the ferryport in Miyanoura has an English timetable. The road winds up and up, with frequent views out over the deeply forested slopes and, on the day I went, low-hanging clouds drifting down over the mountainsides.

You arrive at the 'Shinsen', a wooden lodge with toilets, a shop selling some drinks and a good range of wooden souvenirs (but no food - bring your own), and an information room upstairs. The information is all in Japanese, but there are informative diagrams showing how new trees grow from fallen logs and bare stumps, and some pictures from the walks.

There are four designated routes, of 30, 50, 80 or 150 minutes, though of course it's possible to backtrack or switch between the trails if you want. The two shorter routes are undemanding, with solid paving and steps, and take in a couple of the landmark trees such as the Futagosugi (twin cedars) and the Sennensugi (thousand-year cedar). The longer routes are more strenuous and challenging; while they're clearly signposted and marked throughout, you'll often be walking on rickety-looking wooden steps, stones, stumps and roots, so a pair of ankle-supporting boots is definitely a good idea.

The shorter trails are pleasant enough, with a very peaceful atmosphere; you don't have to get far along before you're surrounded only by nature, the only sounds being the wind in the trees and the gentle wash of the shallow river flowing alongside the path. Even just on the 30-minute course, you get to see a handful of very old trees, and you can enjoy the tranquility of nature left largely undisturbed.

Then, as you leave the paving behind and head out on the longer routes, the forest becomes denser with a thick canopy blocking the sunlight, and it really is like leaving civilization far behind; I felt like an explorer, like the first person ever to see these woods, they were so wild and overgrown, nature allowed free rein. Everywhere there were fallen trees and stumps, exposed roots and trees completely overgrown with vivid green moss and lichens, ferns sprouting from the sides of trees and from overhanging branches, growth upon growth.

The trees towered overhead, and the elder statesmen among them had signs proclaiming their age, width and height. As I looked up, I could see the occasional gap between the treetops, see clouds zipping across the clear sky. At that altitude the weather was very changeable, so at times I'd be in warming sunlight, then the next minute find myself sheltering under a tree from a sudden squall, waiting for a welcome rainbow to signal its cessation.

After I got back to the Shinsen I took the bus on to the Kigensugi, which at 3000 years old is the most ancient tree in the vicinity. Its age clearly showed, the surface bark gnarled and pitted, but its height, width, and sheer bulk made it a very majestic presence. Then on the bus back down to sea level, we saw some of the wildlife that had been hiding while I was in the forest; a few monkeys squatting by the roadside, some deer grazing among the trees, all completely unperturbed by our driving past. I'd have liked to have met them in the forest, just to complete my experience, but even without them, Yakusugi Land was a joy to visit; an escape into primeval nature. 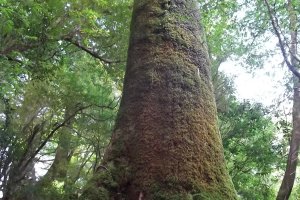 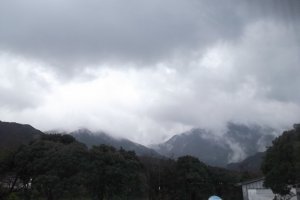 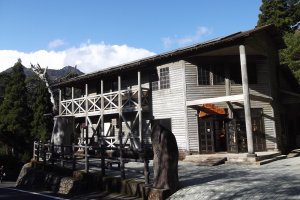 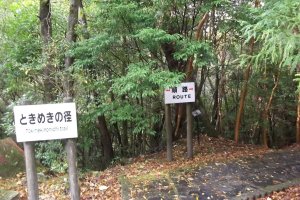 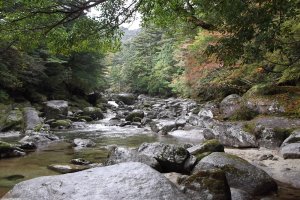 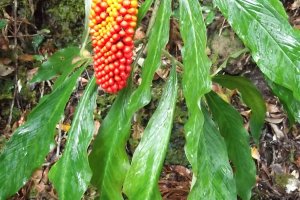