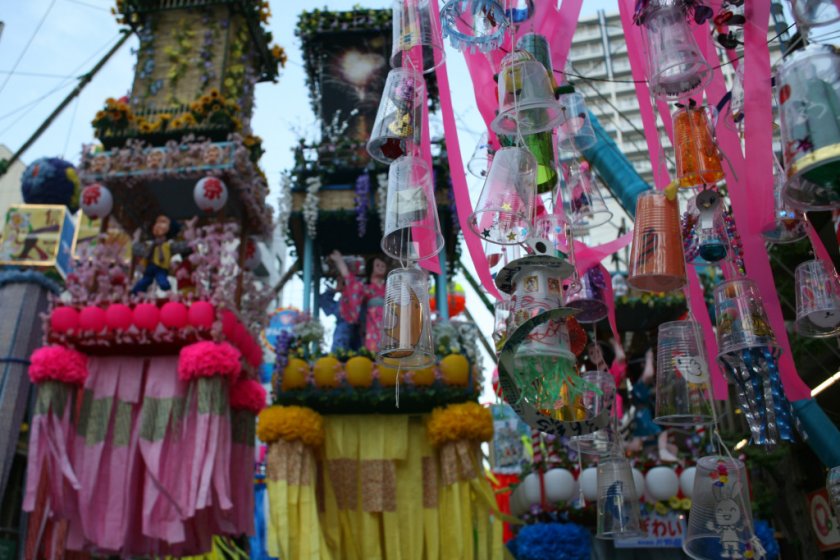 This is a celebration of the Tanabata legend, which originated in China. There are several interpretations of the legend but this is how the story is commonly told in Japan:

Orihime, the daughter of the Emperor of the Universe Tentei, was a talented weaver, but after years of working hard to please her father she realised that she had been so busy weaving that she hadn’t had time to meet a lover. After seeing how sad his daughter was, the Emperor arranged for her to marry Prince Hikoboshi from the other side of the great river, made by the Milky Way. Orihime and the prince fell deeply in love, but Orihime started to neglect her weaving. The Emperor became infuriated with his daughter and banished Hikoboshi back to the other side of the river, but after seeing how sad his daughter was without the prince by her side, he decided to let the couple meet once a year, on the night of July the 7th. This would be the night each year that they, the two stars, could meet. However, on the night of their first reunion Orihime realised that she could not cross the river by herself. A flock of Magpies heard her cries and formed a bridge for her to cross. It is said that if there is rain on the night of 7th July, the magpies can’t help Orihime, so the lovers cannot meet for another year. Each July people hope for clear skies.

Japanese people celebrate Tanabata by making offerings and writing their own wishes onto strips of coloured paper, before tying them to bamboo branches. Traditionally these branches were sent down the river at the end of the festival period, but Tanabata has grown so much over the past few years that this tradition has been stopped in favour of cleaner water.

I step out of the train station to the smell of grilled seafood skewers, takoyaki, and taiyaki batter baking with its sugary sweet bean filling. Sellers cling on to clusters of bobbing Hello Kitty and Anpan-man balloons, and the usually quiet streets are overflowing with festival goers. Music blares from each of the street-facing bars, while in contrast traditional Japanese singing floats down from the loudspeakers. Sellers call out to the passers by with infectious energy and enthusiasm.

From the busy street I look up at the streamers of luminous yellow, pink, gold and blue, filling the sky as they blow in the wind. The decorations hang from every streetlight, rooftop and overhead line, each competing to be the biggest and most colourful on display.

This year it is hot and the streets are full of people in high spirits after a long day spent eating and drinking in the sun. Families have gathered and are filling up on meat skewers and sugary treats. Children fish for prizes while each moment is caught on camera. Couples and friends have met to eat and drink, on the streets full of life, pausing to write their wishes, before adding them to the streams of other people's hopes and dreams.

I spoke to a local bar owner, Senri Miura, who also runs a website for the festival. "Many people here look forward to seeing the decoration of the festival each year, with their hero from sports or drama, traditional motifs like Samurai and Kabuki, and current events or political relations such as Hayabusa's return. Local people look forward to the festival’s food and drink. I especially like the night time illuminations, which are so romantic and beautiful.”

This tradition is the perfect excuse for an early summer celebration. It's a time for people from miles around to set out in their summer yukata and take to the streets in high festival spirits. Hiratsuka Tanabata is a festival of fun, sentimentality and optimism, all in eager anticipation of the approaching festival season.

Take the JR Tokaido line from Tokyo to Hiratsuka. This journey takes an hour.

Lauren is in constant pursuit of adventure, new knowledge and experience fueled by her passion for travel, photography, writing and the world we live in. She is originally from England and currently living in Singapore, while striving to travel as much as possible. This passion for travel has so far taken her through almost 30 countries, with time spent working, studying or volunteering in Cuba, Colombia, Costa Rica and Australia; and over two years of living, working and travelling within Japan. 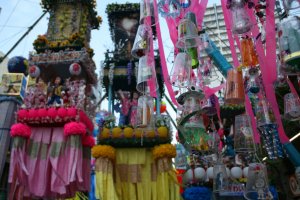 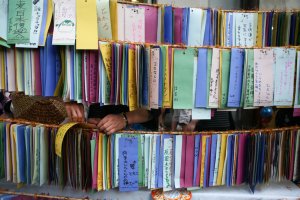 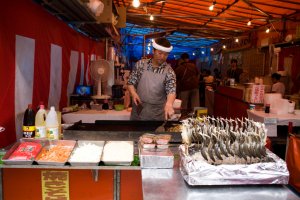 Elena Lisina 2 years ago
Wonderful festival! But the correct dates for 2020 are July 3-5, yu can check on the web.site: http://www.tanabata-hiratsuka.com/
Reply Show all 0 replies
1 comment in total