A temple in Yokohama known for its September blooms

Say the word Saihoji, and most visitors to Japan may immediately find their thoughts tracking to another temple of a very similar name – the famed moss temple of Kyoto. While nearly identical in its anglicization, the Saihoji of Yokohama is a far different temple – though equally worth visiting by anyone passing through the area.

Saihoji was first built in Kamakura around 800 years ago, but was moved to its current site during the Muromachi period. Even before the temple was established, local villagers enshrined and worshipped Kannon, the goddess of mercy, on the slopes of the small mountain here.

The temple is notable for the distinct thatched roofs of both its sanmon (the main gate leading into the precincts) and its main hall. In one of the side buildings, the temple also hosts monthly meditation and sutra copying for interested community members.

However, it's in late September when Saihoji really shines with its blooming spider lilies, or cluster amaryllis. These delicate flowers are known colloquially in Japan as higanbana, or equinox flowers. They earned that moniker since they seem to bloom around the same date as the autumnal equinox. Spider lilies are more commonly seen in Japan’s countryside, where farmers once planted them around rice paddies in hope that the flower’s poisonous bulbs would be a deterrent to rodents looking to snack on the rice crop. Spider lilies are a rarer occurrence in Japan’s more heavily populated areas, making the flowers at this suburban temple a treat for city dwellers.

Spider lilies are also associated with various legends, and in Japan can be known by a variety of names. Considered by some to be the “flower of death,” it is believed that the name can also refer to the “other shore,” where souls go in death. The brightly colored petals are said to guide spirits on the path to the afterlife. The flower has also earned other nicknames like hurricane lily, fox flower and hell flower.

While red is the most common color of spider lily blooms, the display at Saihoji features yellow and white varieties as well. The walkway leading from the temple’s entrance is lined on both sides with red-petalled higanbana, but the slopes next to the stairs leading up to the temple’s main gate are planted with yellow and white blooms on each side. While the flowers are generally separated by color, there are enough spots where a few rogue lilies have made their way into a group of another color, offering photographers a great contrast to their shots.

In recent years, the temple has extended their hours into the evening to invite visitors to an evening illumination of the flowers. Dates vary, but the event generally takes place around the week of the autumnal equinox.

Saihoji is also one of the temples on the Yokohama Seven Gods pilgrimage route, most popularly followed by worshippers in the New Year period. Saihoji houses the god Ebisu, the only Japanese god of the seven and a protector of fishermen.

To reach Saihoji Temple, take the Yokohama City subway blue line to Nippa Station. From the station, it is an eight to 10-minute walk west to reach the temple precincts. Parking on site is also available, with space for around 30 cars. 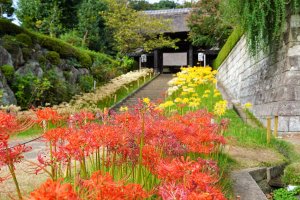 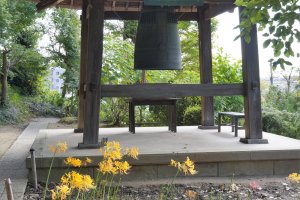 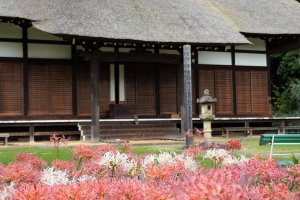 Sébastien Duval a year ago
I equally like this article for the discovery of a spot as for learning about the colour variations of the spider lilies :) Thanks for sharing your photos & knowledge, Mandy!
Reply Show all 0 replies

Bonson Lam a year ago
Fascinating story about the spider lily and a great cover photo here.
Reply Show all 1 replies

Kim a year ago
I had no idea that there were both yellow and white variants of spider lilies! Looks like a gorgeous spot to visit when the flowers are blooming!
Reply Show all 1 replies

Mandy Bartok Author a year ago
I had never seen yellow spider lilies prior to my visit here. Quite the surprise!
Reply

Sleiman Azizi a year ago
That thatched roof is just so good to look at. Nice find!
Reply Show all 2 replies

Mandy Bartok Author a year ago
The bell tower roof was thatched as well!
Reply

Sleiman Azizi a year ago
Not sure why but bell towers are a thing with me. And a thatched one just adds all the more character to it.
Reply
8 comments in total