Three men dazzle the eye at JR Kochi Station. They are a commanding, much photographed and admired presence. They are actually statues, of Sakamoto Ryoma, Takechi Hanpeita, and Nakaoka Shintaro, esteemed samurai instrumental in bringing about Japan’s modernization. Kochi has other luminaries, but the trio, especially Ryoma, are made much of in Kochi. Like all tragic heroes, they died too young, and unnaturally, for their cause to liberate Japan from a seemingly never ending feudal Shogunate.

Both Ryoma and his sidekick Hanpeita organized a Tosa Loyalist Party with the slogan of Revere the Emperor, Expel the Barbarians. Ryoma, on hearing of Commodore Perry's landing, is attributed with saying he would bring back a foreign head. Luckily for Japan, he was a far sighted visionary, who realized the folly of pig-headed thinking, and that it would serve Japan better to learn about western philosophies of governance. He wrote a political treatise that became a blueprint for a Japan based on democratic principles. Ryoma looks rather modern in photographs. Apparently he wore samurai dress but liked western shoes.

His chum Nakaoka Shintaro collaborated with him to bring about the alliance of two hitherto warring factions. This was a crucial step because the alliance strengthened moves to overthrow the Shogunate government, acting as catalyst to the Meiji Restoration. Nakaoka and Ryoma, like many best friends, did not always think alike. Nakaoka is said to have favored force in sending the Shogunate on its way, but Ryoma wanted a more peaceful unification for Japan. Even so they were best friends to the end, talking into the night as best friends do, when both were offed by an unknown but skillful assassin in 1867. They are still together, side by side in a heroes' cemetery in Kochi.

Both Nakakao and Ryoma had close connections to the revolutionary Tosa party leader Takechi Hanpeita, another samurai also partial, like Nakaoka, to aggressive tactics in overthrowing the Shogunate. He was sentenced to die by seppuku (suicide by disembowelling) for the assassination of a pro-Shogun notable, although this may have been a trumped up charge. His seppuku in 1865 seems glorified in the literature, more than his actual life.

Despite all three being players in the Meiji Restoration, it is Ryoma’s image that is plastered around Kochi, from buses to restaurant menus, even outside a station bathroom wall. Kochi is “Ryoma-ized”, with a Ryoma memorial museum or two, his birthplace is landmarked, and there is a TV drama, a holiday tourism campaign, an airport, and a college in his name. Asteroid 2835 was even named after him. His statue adorns Katsurahama Beach as it does Cape Muroto.

These swashbuckling samurai somehow blend in and embellish the contemporary design of JR Kochi. The station, nicknamed the Whale Dome because of its whale shaped roof, is an admirable design of Kochi cedar and cypress bent like a whale’s bones, held in place by steel.

One reason forwarded why many of Japan’s great thinkers and political reformers like Ryoma and his ilk thrived, no matter how short term, is that Kochi’s mountain spirit of individuality and independence fostered fertile ground for radical and free thinking. There is a saying that "Freedom Comes from the Mountains of Tosa". 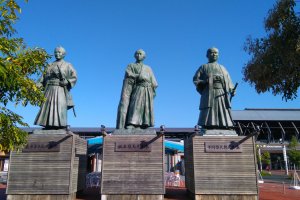 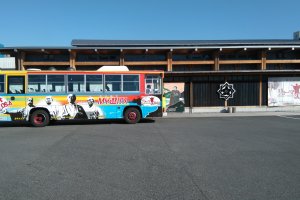 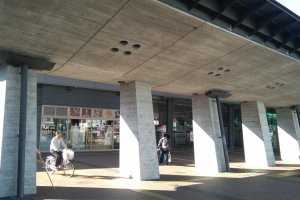 Jihad Mahmoud 3 years ago
It is interesting to learn more about Japan's history.
Reply Show all 0 replies
1 comment in total