In my post-university years, I was lucky enough to live in France for a time, where I developed a love of traditional Breton galettes. Sadly, these savoury buckwheat pancakes aren't readily available here in Japan, outside of the major cities. Yet a drive along the southern rim of the Mt Aso caldera the other month led to the chance discovery of Cafe Restaurant Galette, a tiny roadside eatery that serves up the very same galettes I have been craving.

Cafe Restaurant Galette is part cafe and part antique shop, which explains the jumble of objects in their side yard. Inside, however, the main dining room is cozy and organized. There are little Francophone touches throughout, such as French language posters, miniature Eiffel Towers and Edith Piaf on the stereo. There are also two stand-alone rooms for larger parties (4-6 people). While these are comfortable, it can feel a bit isolating when the door shuts.

The menu includes both savoury and sweet pancakes (known as galettes and crepes, respectively). The galettes conform mostly to the typical French offerings - ham, cheese and egg, for example - but also make use of local ingredients like mushrooms. The sweet crepes are also very typical of what you'd find in France. The basic crepe is simply butter and jam, while slightly more loaded crepes may involve chocolate, banana and whipped cream.

You can order a la carte or choose a "formule", a set menu. These menus offer multiple combinations of galettes and crepes or galettes and a regular dessert. If you order the menu, you'll be served a steaming bowl of clear soup to start. That's followed by the galette, which takes up an entire plate. It's served in the standard Breton style, with an opening in the center that showcases the contents. Despite the thinness of the pancake itself, these galettes can be quite filling so don't underestimate their size and order too many! As I chose the set menu with the regular dessert, I was treated to two milk-based options, using dairy products from Mt Aso's local farms. The ice cream was smooth and topped with a fresh sprig of mint but it was the coconut pudding with raspberry sauce that really made my meal.

For drivers, there is a small parking area for a half dozen cars right out front. For those using the train, you can get a taxi from Minami-Aso or Takamori stations (about a 10-15 minute ride). 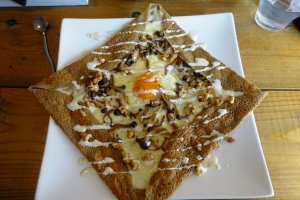 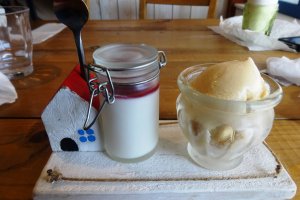 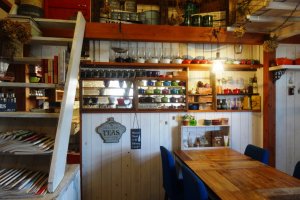