A traditional old ball game played at a Kyoto shrine

If you're in Kyoto during the first week of January, I recommend you do not miss a pleasant and fun event: the Kemari Hajime.

On the 4th of January every year, Shimogamo Shrine in Kyoto hosts the Kemari Hajime festival, held to honour the gods.

Kemari is a game played with a "mari", a deerskin ball weighing about 150g. The ball is kicked around by the players, who are dressed in traditional colorful court costumes, with traditional long-sleeved 'suikan' jackets and formal shinto priests' 'eboshi' hats.

Kemari is said to have been introduced to Japan from China during the Asuka Period (6th to 8th Centuries), and was popular among noblemen in the following Heian Period, spreading later from the court to Samurai and to the general public. Although Kemari declined after the Meiji Restoration in the 19th century, the Kemari preservation group "Shukiku Hozonai" was established in 1903 to preserve the tradition.

At 2:00pm on the 4th, members of the Kemari Preservation Society in their traditional costumes appear on the Kemari court in front of the Shrine's main sanctuary. Wedged in a branch, the ball is taken by one of the players, and a first group of eight players grouped in a circle start to kick the ball high, shouting "Ari", "Ya" and "Oh", while spectators clap and shout. The game has no winners or losers.

During the game one of the society members acts as commentator and explains to visitors the stages of the game. In 2014 a commentator from a Brazilian sports channel joined the event to make a special report, in relation to the World Cup held in Brazil that year.

The game is held in a limited space, the court is small, and the event attracts a lot of people so, if you want to see the Kemari Hajime and take some good pictures, be sure to arrive early, and wait patiently for the game to start. 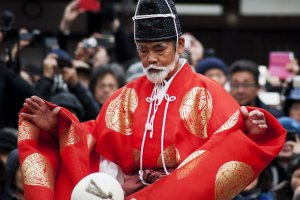 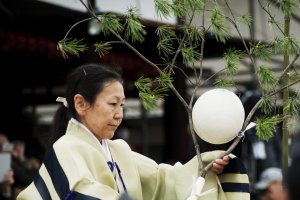 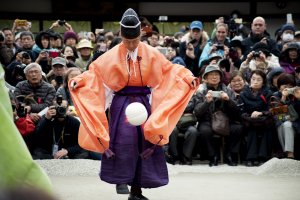 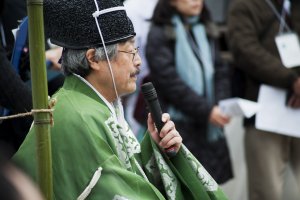 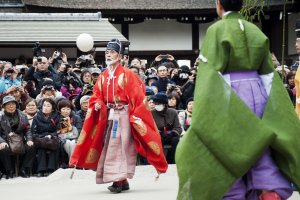 Preethu 4 years ago
Thanks for sharing.
Reply Show all 0 replies
1 comment in total