Ginkakuji (Silver Pavilion), officially named Jisho-ji, is a Zen temple along Kyoto's eastern mountains in Higashiyama. When the temple garden was built on 1482 as a retirement home for shogun Ashikaga Yoshimasa, silver leaves were originally planned to cover the retirement home. It is said that Yoshimasa ran short of money during the making of that part of the pavilion. The “Silver Pavilion” name lives on even though no silver was ever applied. Ginkakuji is modelled after Kinkakuji (Golden Pavilion), which belongs to his grandfather and is located at the base of Kitayama, Kyoto. After Yoshimasa’s death the pavilion was converted into a Zen temple in accordance to his last wishes, as we see it today.

Although gifted with intellect, the shogun Ashikaga Yoshimasa was known to be an incompetent ruler. Much of his interest were in the arts, drawing inspiration from Zen Buddhist sensibilities. Yoshimasa was a designer and a patron at heart, thus leading Ginkakuji to be a center of contemporary art culture known as Higashiyama Culture. The arts such as tea ceremonies, flower arrangement, garden design, architecture, Nogaku Theater and poetry were successful and had a far-reaching impact all throughout Japan. And this is a probable reason why the temple's Kannon-den and Togu-do were both selected as National Treasures.

Ginkakuji Temple Garden’s area is around 25,000 square meters and composed of two terraces. The Kannon Hall pavilion has two stories and was constructed in two styles of architecture. Inside there is a statue of Kannon, the Buddhist Goddess of Mercy, unavailable for viewing of public. The pavilion continues to undergo regular renovations to improve its structure and resistance against earthquakes.

Just upon entering the precinct is a large sand mound (Moon Viewing Platform) surrounded by a meticulously done raked sand below it (Sea of San Garden). These sand art forms are said to accentuate the beauty of the moon. From there, the walking path leads its visitors to reflective ponds, a moss garden, and a bridge up to a wooded hillside where you can see Ginkakuji in its entirety as well as its far-off neighborhood. All these manage to compose a spectacular view of the temple’s elements in an artful strategical placement.

Find out more about Ginkakuji. 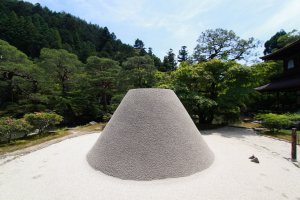 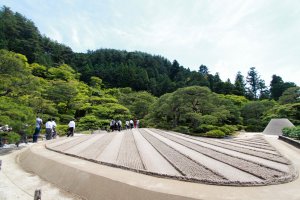 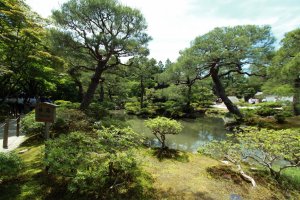 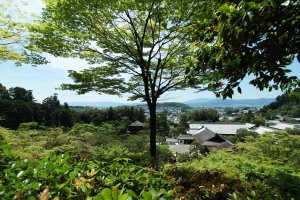 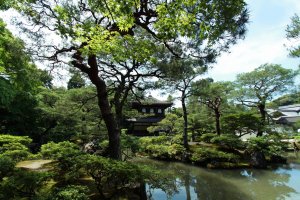 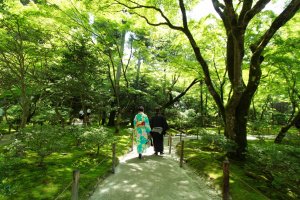 Olga 5 years ago
My plan is to go there next time when I'm in Kyoto. Never seen it before.
Reply Show all 0 replies