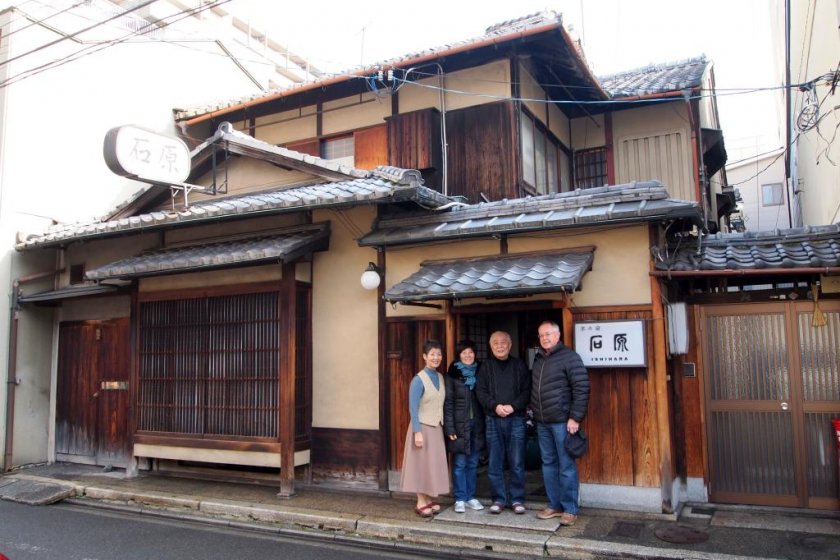 Ishihara Ryokan with the Ishiharas

Actually, we'll start with night 2. We stayed in the Ishihara Ryokan which is centrally located. It's an 80 year old building and the current owners, the Ishiharas, bought it 50 years ago when it was an antique shop. The price includes breakfast (western if you ask in advance) and the rooms we stayed in had private toilets and baths. This was the favorite place for the famous film director, Akira Kurosawa, to stay in. Ask Mrs. Ishihara to show you the slippers he wore when he stayed there. At the time they had to go out and find a pair big enough for his feet. He autographed the slippers and she keeps them under the steps. Notice all the lamps around the building. These were all handmade by Mr. Ishihara using kimono dying pattern material that he gets from some of the kimono makers. Say hello to the 42 year old turtle who lives in the little concrete pond in the garden. He was hibernating while we were there. The Ishahara's son lives in Austin, Texas where he is a sushi chef and teaches skydiving on the weekends.

Mrs. Ishihara gave us directions to a great place for okonomiyaki for our dinner. It's well off the tourist -track, but worth the few minutes walk along the river to get there. It's called Yumeya (phone: 075-751-9645). No English, but the menu has plenty of pictures. Some call Okonomiyaki Japanese pizza, but it's real meaning is "grilled as you like" and Yumeya has a good selection of ingredients, including yakisoba (fried noodles). It's located on Kawabata Dori, near the cross street of Nijyo.

On day 3, after breakfast served by Mrs. Ishihara, we headed out for another walk through the Gion District. But, before heading there we did a tour of the Nishiki Market, a must see street full of shops selling all sorts of food and a few other items. It's a short few blocks walk from Ishihara Ryokan to the market street. Along the way to the market street you'll also pass Suzuki Shofudo on your right. Stop in and have a look at the well crafted washi (paper) items for sale here. It's easy to spend an hour or so walking up and down Nishiki Market - give the little octopus on a stick a try? You can sample various food items and of course, you can buy as much as you like. Take home a few souvenir crackers or other goodies.

From the market we made our way to the back streets of Gion just past the Kabuki Theater. You can wander in and out of the various streets, but be careful if you happen to be there on a horse race day, as we were. The traffic is pretty heavy on the one street that is open to cars. All those punters are in a hurry to get there and put their bets down! It's not a race track, but it's the place in Kyoto to lay down your bets.

From Gion we headed back to say farewell to the Ishiharas and pick up our bags. From there it's a short walk to the subway station to catch the subway back to Kyoto station in time to buy some obento lunch to have on the train ride back to Tokyo. 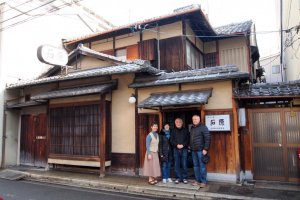 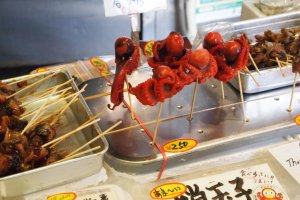 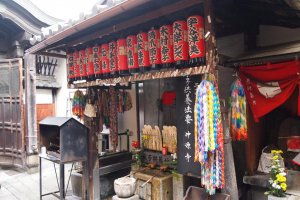 Joe Peters Author 6 years ago
Thanks. Renting the taxi with the guide/driver is definitely worth it if you're going.
Reply
2 comments in total