Each year on the first Sunday in March, Kyoto's Umenomiya Taisha Shrine is home to a plum blossom festival that celebrates the arrival of spring. The grounds here are dotted with around 500 plum trees as well as a host of other flowers and trees which bloom later in the year, including sakura, azaleas, irises, and hydrangeas.

The plum festival also coincides with the shrine's childbirth festival. Umenomiya Taisha has long been a place where people have prayed in order to conceive a child, and then to deliver a child safely. It seems to be a fitting time to celebrate it - the beginning of spring, and the celebration of new life!

Admission to the main temple is free, but to enjoy the gardens the admission price is 550 yen for adults, and 350 yen for children over the age of 6.

Umenomiya Taisha Shrine is located a three minute taxi ride or around 10 minutes on foot from Matsuo-Taisha Station, served by the Hankyu Arashiyama Line. 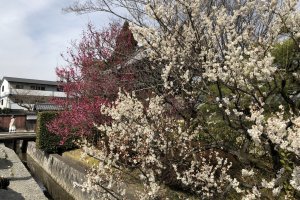