Often, finding food that fits a vegan lifestyle in Japan can be a little tricky. Dashi stock creeps its way into many things, tempura batter contains eggs, and sushi...well, that's self explanatory, isn't it?!

Thankfully though, more and more dedicated vegan restaurants and cafes are popping up across Japan - with food that is incredibly tasty whether you're vegan or not. One such spot is Morpho Cafe, located in Kyoto. It's not as well known as some other vegan eateries in Japan so it's something of a hidden gem right now, but that's not likely to be the case for too long.

As you approach the cafe, you'll already feel the charm - there are plenty of potted plants out the front, and gorgeous wooden accents that make the premises feel warm and inviting. Upon entering, the vibe inside is very chill and relaxed, and the waiter who took our order spoke perfect English.

The menu here is extensive, with plenty of options to suit just about anyone's taste buds. The eggplant pizza is full of flavor, and the Thai green curry has just the right amount of spice. There are plenty of other savory food options, including vegan ramen, vegan bolognese pasta, and soy meat and imitation fish burgers that are all 100% vegan friendly - there's even a kids plate option if you're traveling with little ones in tow. If you're concerned about not being able to read Japanese, don't let that deter you from a visit - as well as staff speaking English, they've also got an English copy of their menu, so that nothing gets lost in translation.

The sweets here seem to change on a rotational basis, but include the likes of chocolate cakes, parfaits and more. If you don't have time to sit in and enjoy the ambience, many of those sweet treats are available on their takeout menu. 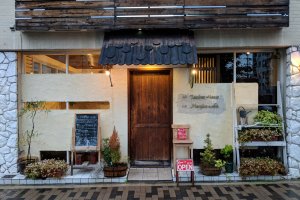 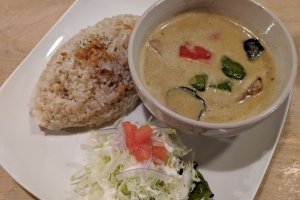 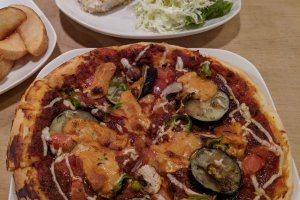 Lynda Hogan 11 months ago
Sounds like my kind of place.
Reply Show all 1 replies

Kim B Author 11 months ago
It was really good! My sister is vegan, so whenever she visits Japan we hunt down vegan places. It's becoming easier and easier across the country to find places!
Reply
2 comments in total