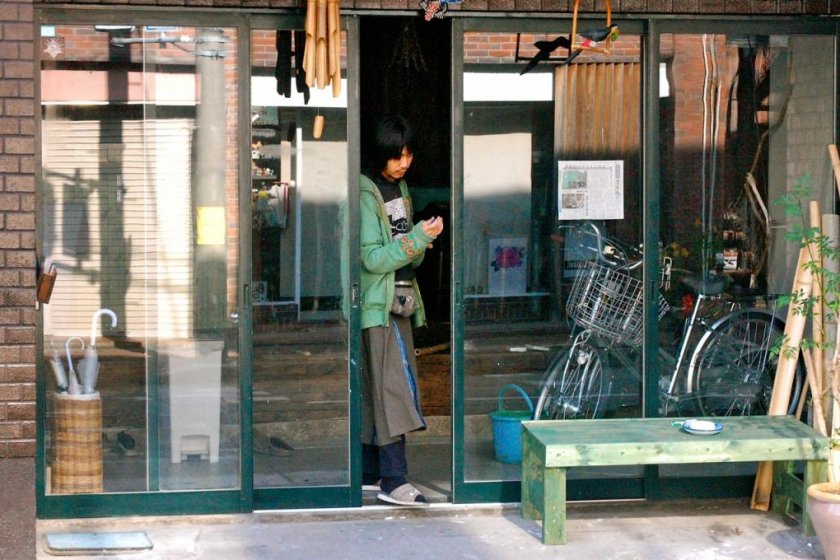 Owner Hiromichi Marui steps outside for a break.

It’s just after checkout time at Ise Guesthouse Kazami, and things are quiet. Near a street-facing window, a staff member is installing shelves made from bamboo reeds gathered from the banks of the nearby Miya River. In the kitchen, a volunteer is painting a mural on a once-blank wall. Outside, drivers turn their heads as they pass, probably wondering what’s going on at the bright-green building on the busy corner near Ise-shi station.

The guesthouse, essentially a hostel, is called Ise Kazamisou in Japanese. It opened in December 2011 after a long renovation process that drew on a network of volunteers and the focused drive of Hiromichi Marui, the 32-year-old owner who one day decided he’d like to open a hostel in his home town of Ise. Guests can stay in shared dormitory rooms (mix gender or female only) or pay slightly more for a private room.

Marui’s car pulls up to the front door a few minutes past 11. His arms are full but he manages a handshake and a quick introduction. He invites us to sit down at the heated table in the common room as he takes care of a few things around the three-story building, formerly a traditional style inn with 80 years of history. The common room, alternatively called the “free space,” features a computer (plus free Wi-Fi), a guitar, and library of reading material.

The common room used to be four different rooms and a stairway, Marui explains after he joins us at the table. The walls, and the staircase, are gone, creating a wide, flowing space punctuated by wall-art and hand-made fixtures on the walls and doors. Marui answers each question simply and directly. Why start a guesthouse in Ise? There wasn’t one in town. Why this location? It’s near the JR train line, thus convenient especially for overseas tourists.

Foreign travelers are just one of Marui’s targets. He hopes to draw domestic travelers as well, and the low cost of a bed for the night (¥2,600 for a bed in a shared room) opens up new demographic: locals who spent the night on the town and can’t drive home. For some who live away from the city center, a room at the inn would be cheaper than a taxi ride home.

Beyond overnight guests, Marui sees the common room as a place to just come and hang out, even for those who aren’t sleeping over. He said the open room is also a “communication space and an art space" that would sometimes host musical performances or other events.

Marui himself is a musician, part of a punk band whose name he didn’t share since it changes so often. He spent the last three years living in Yokkaichi in northern Mie, working as an air conditioner repairman, saving money for travel and using free time for his band. Opening a hostel wasn’t a lifelong dream, he says. He got the idea and decided to take action. It took money, hard work, and an army of volunteers (some of whom have stayed on long-term, working in exchange for room and board).

As our interview wraps, Marui excuses himself to see off two guests. He gives a handshake and chats with them as they head toward the door.Outside, he takes a short break and chats with a staff member. Locals drive by, their heads turning. If they want to know what’s going on in the bright green building on the corner, they’re welcome to stop by any time. 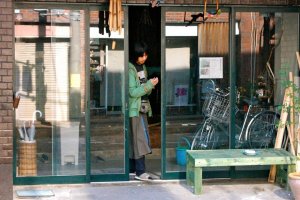 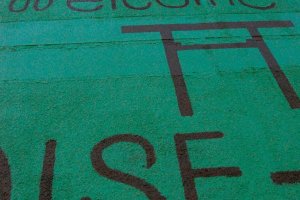 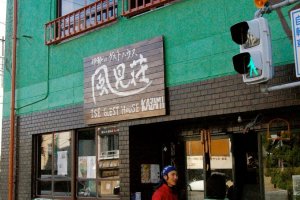