Koke no Mori – The Moss Forest

An entire forest covered in moss in North Yatsugatake

Straddling the border of Chino, Sakuho and Koumi, the Kita-yatsugatake (North Yatsugatake) is known for its “Koke no mori” (Moss Forest). The moss forest is now getting popular as one of the locations chosen for this year's Shinshu destination campaign.

I had the fortune of joining a 'moss tour' organized by the Kita-yatsugatake Moss Group.

There are more than 1800 species of moss only in Japan! I was so surprised when discovering about such diversity during the tour: there is Shippo-koke (Tail moss) which looks like the bushy tail of a horse, the Sugi-koke (Cedar moss) which is just like a miniature cedar, the Kamoji-koke (False hair moss) which is like a carpet laid on tree bark, and Chirimen-koke which is like a silken cloth with good texture. Moss has no roots, surviving via photosynthesis and absorbing moisture from the air. That is why moss can grow even where the soil is infertile.

The forests of Kita-yatsugatake were born from relatively recent volcano activity, making it an ideal habitat for moss to thrive, given the soil is relatively lacking in nutrients.

There are 485 species of moss in Kita-yatsugatake. The places where you can see so many species of moss are extremely rare and that's why the moss forest is often compared to Yakushima.

Moss reproduces through spores, but some moss varieties extend little antennas, or 'sporophytes', too. When this moss flower grows out, you can see many different typos of moss flower, even at different times of the year. 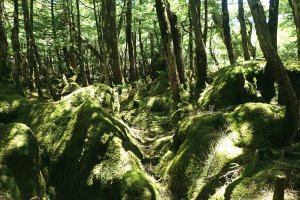 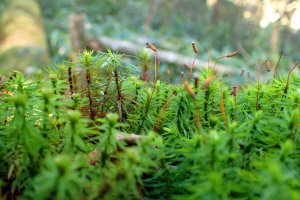 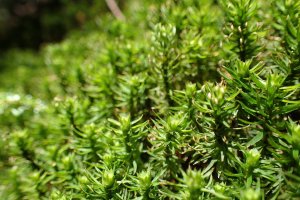