Remarkable, with history at its core

Hidden behind high rise buildings and 9 minutes walk from Nagasaki Station is one of the most unique temples I have come across during my travels in Japan.

The Fukusai-ji Temple was created in 1628 by Chinese immigrants in response to a new anti-Christian law. The Terauke-Seido required Chinese nationals to register with a temple to prove that they were not Christian. Instead of joining the local temples, the Chinese community in Nagasaki decided to build their own and this was the beginning of Fukusai-ji Temple.

The original temple was completely destroyed after the Fat Man bomb was dropped over Nagasaki in 1945. The Fukusai-ji Temple as it stands today was reconstructed in 1979. Instead of rebuilding the temple to look like others in the area, a unique and symbolic design was chosen. It is dedicated to the casualties of war and their happiness in the next world.

But why is it so unique you ask?

Starting from the top there is an aluminium statue of Kannon, the Goddess of Mercy, that towers over the temple, 18 meters in the air. She can be seen from the moment you turn to walk up the hill where the temple sits proudly at the top. The statue stands on a turtle's back which forms the walls and roof of the temple that symbolises Buddha. The turtle also has a silver aluminium head that hangs over the door way and shines brightly as the sun catches it at sunset. Children are at the feet of the Goddess Kannon. With her left hand, she is said to be giving nectar to the victims who are suffering and with her right she is praying that the victims sleep peacefully.

As you walk inside the temple you will notice a wire string that drops into an opening in the floor of the temple. A Foucault Pendulum is attached to the top of the statue from inside and hangs down into the basement. At the time of construction it was the third largest in the world at 25.1 meters long.

Under the temple lies the mausoleum which houses 16,000 WWII victims and a slightly creepy war memorial. To find this you need to head to the right side of the temple and takes the stairs down to the basement. There is no reception of desk, you can simply turn on the lights yourself for the small yet significant museum. It has uniforms of deceased soldiers in glass cases, empty bullets, photos and, of course, the large gold pendulum in the middle of the room.

A bell tolls at 11:02 daily, the exact time of the explosion of the atomic bomb. This temple is definitely worth the walk and there are no crowds. 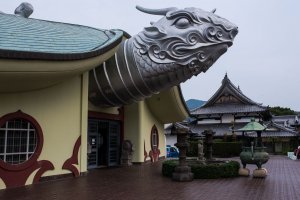 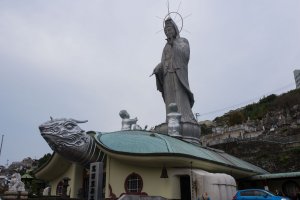 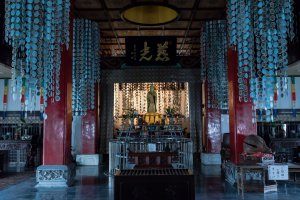 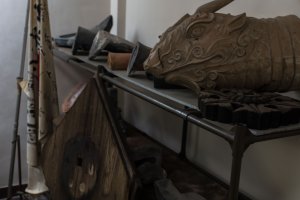 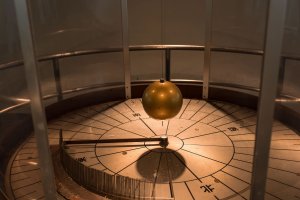 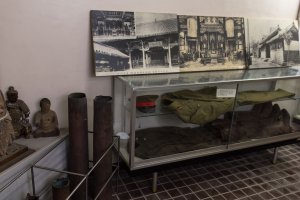 Daniel Hazen 6 months ago
Very interesting. Thank you for this. I first learned about this temple on my friend Chad's YouTube channel Discovering Nagasaki From A Local, Episode 40: https://youtu.be/jqJ2uR84Bnc

I was in Nagasaki for 8 days a few years ago and missed this site. The most moving other site to me was the One-Legged Torii. Kannon is also probably my favorite Buddhist bodhisattvas or manifestations.
Reply Show all 0 replies

Terrie Lloyd 5 years ago
This location speaks volumes about the need to know the background story. If I was to pass a rather weird looking turtle-shaped concrete temple, I doubt I'd be stimulated to wander in. And yet, knowing the significance of the temple and its original purpose, I'm sure it could easily become an "underground" attraction for people visiting Nagasaki. I had to look up what a Foucault Pendulum is, and found from Wikipedia that it describes a pendulum with a long suspension wire, that can be used to demonstrate the rotation of the earth. So... was one of one of the monks in the last one hundred years interested in mathematics? If so, maybe there's another interesting story to be had about this temple.
Reply Show all 1 replies

Jemma King Author 5 years ago
Terrie, I agree too much content for one article.
The pendulum symbolises eternal peace in line with the earth’s perpetual movement and rotation. Well worth a visit!
Reply
3 comments in total