A spectacle in Nagasaki

Surely one of the quirkiest and downright most delightful of surprises that Nagasaki offers up is the famous Megane-bashi, or Spectacle Bridge. One of numerous bridges spanning the Nakashima river running through Nagasaki, Megane-bashi is a character-filled architectural anomaly.

The story goes that in 1634, a second generation Chinese monk from the nearby Kofukuji temple oversaw the bridge's construction. This makes Megane-bashi one of Japan's oldest bridges and, as befitting its oldest bridge in Japan status, Megane-bashi is now designated as an Important Cultural Property. Megane-bashi has survived a couple of floodings as well as an atomic bomb. Some serious character building right there.

Notwithstanding its history and the resulting national clout, it may very well be the bridge's character that gives it its popularity. If there ever was a bridge that was endearingly charming and quirky, Megane-bashi would be it.

With its famous double-arched shape, Megane-bashi's reflection in the river gives off the distinct illusion of spectacles in the water. Straightforward enough it would seem, yet the live image is quite surreal and, dare I say, hypnotic. I'm not sure if pictures can actually do it justice.

The more memorable images are from below the bridge along a walkway that borders the water's edge. The walkway is easily accessible from a series of steps leading down to it from the bridge above. There is also another great spot for photos from a set of stone blocks acting as steps across the river.

With its long history, cultural significance and plucky charm, Megane-bashi is a cute marvel of persistence and personality, and well worth a visit.

Megane-bashi is a short walk from either Nigiwai-bashi or Kokaido-mae tram stops (stops 37 & 38 respectively). If you are coming from Nagasaki Station, be sure to transfer at Tsuki-machi for the Hotarujaya-bound tram. 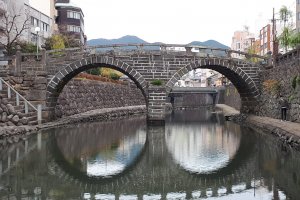 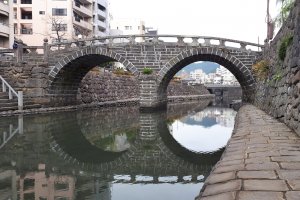 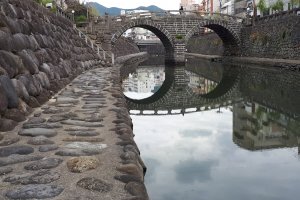 Kim B a year ago
I really thought it was a beautiful spot, too. When I visited, there was a small cart with a vendor selling castella cake flavored ice cream - we sat and enjoyed some and just soaked up the view!
Reply Show all 1 replies

Sleiman Azizi Author a year ago
It really is a lovely spot. I can't impress just how much I was mesmerised by it.
Reply
2 comments in total