Nagasaki boasts Japan’s oldest Chinatown and those cultural ties are celebrated annually in this two-week festival that corresponds with the first fifteen days of the Chinese New Year.

Much of the activity centers in and around Nagasaki’s Chinatown, with parades and cultural performances. Many of the shows have their roots in traditional Chinese culture, such as lion dances and the Mazu Procession, a parade that recreates the route Chinese sailing crews once used to enter the port city.

A full schedule of the festival’s events can be found at the local tourist information centers. 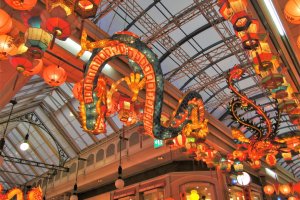 Tristan Scholze 3 years ago
This festival is a lot of fun! Great time to visit Nagasaki.
Reply Show all 0 replies
1 comment in total