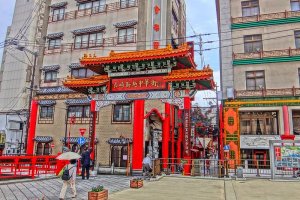 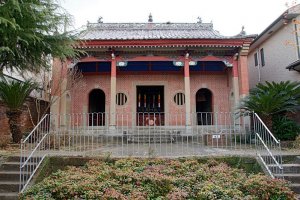 Nagasaki Shinchi Chinatown is the oldest of its kind in Japan. There are only three Chinatowns in Japan. The district in downtown Nagasaki extends over about a city block and is home to a variety of shops and restaurants. In addition to mainland China-inspired dishes such as Chanpon and Sara Udon can be found here as well as other Chinese foods and much more.

Visitors flock here every year for the food and especially for the New Year celebrations. The festival dates vary from year to year, but usually take place from late January to March. During the Chinese New Year celebrations, Chinatown becomes the center of the Nagasaki Lantern Festival, a popular event that sees thousands of lanterns illuminate the city.

Located at the cardinal directions around Chinatown are four gates decorated to represent the four heavenly beasts: a phoenix, white tiger, two-tailed turtle, and blue dragon.

This area of Nagasaki Shinchi Chinatown is where the Chinese residents were once required to reside. Also known as Tojin Yashiki, the area retains many signs of the former settlements and even Chinese shrines and temples.

Located a short walk from Shinchi Chukagai stop on the Nagasaki tram, lines 1 and 5.

Nagasaki rings in the Chinese New Year with a two week cultural celebration.

Seemingly endless rows of brilliant lanterns at Nagasaki Shinchi Chinatown, one of the three biggest Chinatowns in Japan!

Nagasaki rings in the Chinese New Year with a two week cultural celebration.

Light, fluffy, and oh so tasty, Nagasaki's Kakuni Manju are a staple on the city's food scene. Try them at Iwasaki Honpo,..