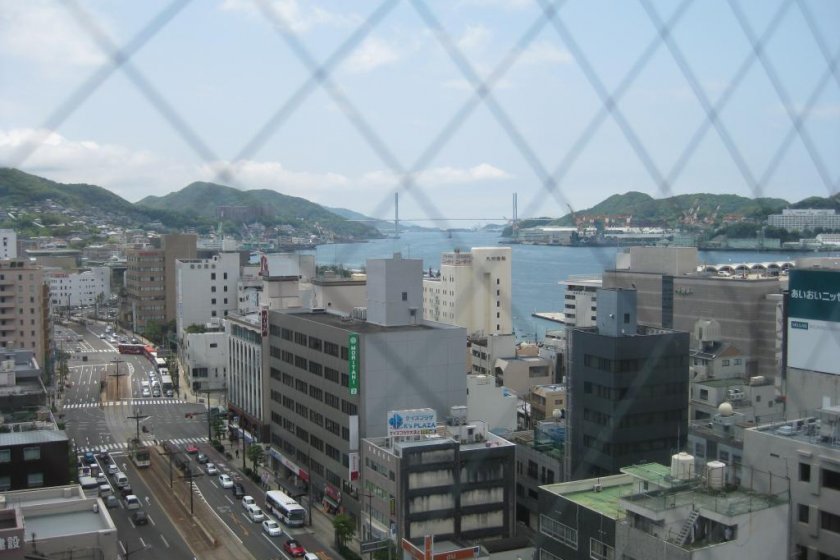 Located on one of the city`s main thoroughfares, the 14 floor Chisun Grand Nagaski is right on the blue tram line and a 5 minute walk from the JR station. Other hotels and restaurants populate the well-lit area near the harbor.

The hotel's small lobby is inviting, comfortable, and well-staffed. The staff did not speak English, but I received impeccable service and easily got by with my limited Japanese. Though I arrived quite early, they were very accommodating and insisted on giving me my room right away. The concierge presented me with a typed-up welcome letter in understandable English and a complimentary breakfast coupon. After giving me a tiny welcome castella cake (famous in Nagasaki), he personally escorted me up to my room and was eager to answer any questions.

My room was on the top floor (the 14th), overlooking the harbor. The top two “Grand” floors could only be accessed by using one`s room key in the elevator, adding an extra layer of security that was comforting as a single female traveler. My room was small, but immaculately clean and tastefully decorated. The complimentary soap, shampoo, razor, etc. were nice quality, and tea and coffee packets were also provided.

Slippers, a hair dryer, and a nice, modern writing desk added to the hospitality. The flat screen TV`s dark brown edges matched the decorating of the rest of the room. An alarm clock and iPod dock were pleasant surprises.

The bed was very comfortable and relatively large, and featured several real, Western-style pillows. The walls were nice and thick, and I heard nothing all night from other rooms, a rarity in Japan.

In the morning, an English language newspaper had been slid under my door. I stopped for some breakfast before checking-out, and the extensive buffet featured both Japanese and Western options. The dining area was small (I had to wait a few minutes to be seated) but nice, and there was a TV playing for those who wanted to catch the morning news.

Overall I was very pleased with the amenities and service at Chisun Grand Nagasaki and would recommend it to anyone, especially non-smokers, as it can be hard to find non-smoky rooms in this country. 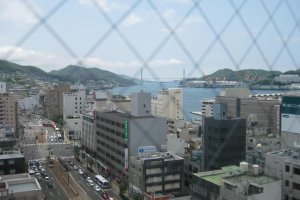 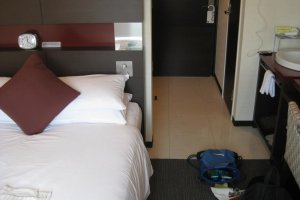 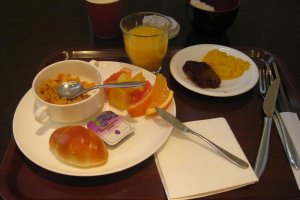 Note: This hotel now operates as S Peria Hotel Nagasaki - but the article is predominantly about the former Chisun Grand Nagasaki.

Michelle Ishiki 8 years ago
I just got back from two nights at Chisun Grand Nagasaki. I would also recommend it, especially for vegans. Didn't know it when I made my reservation, but it's within walking distance of a few vegan friendly businesses. Easy access to public transportation and several tourist spots are within walking distance.
I liked how the tub, sink and toilet weren't in the same room.
There were two amenities I'd never seen before, a scale and a body sponge.
I felt special because I was given a room on the top floor too. The room had a similar view.
Reply Show all 0 replies
1 comment in total