Nagasaki is a city with loads of fantastic regional cuisine to enjoy. Whether it's some Nagasaki champon or Castella cake, or the myriad of goodies in between, you're bound to find a host of things to delight your taste buds.

If you're a fan of pork belly, one thing you need to try when you're in town are kakuni manju. Thick pieces of pork belly are simmered with dashi, soy sauce, sake, sugar, and mirin until they're melt-in-your-mouth soft. Those pork pieces are then wrapped up in a light, fluffy steamed bun, and voilà - you've got yourself one of Nagasaki's most delicious delicacies.

Where to get your hands on some kakuni manju? There are a host of places to try them, many of which are centered around the Nagasaki Chinatown area. The one we decided on? Iwasaki Honpo. The staff from the store were handing out samples to potential customers, and they were so good that we knew we needed to go in for more. Each bun is around 400 yen a piece, but they're very filling.

If you do get hooked on them like I did, you're able to either pick some boxes up to take home with you, or order off their website. The products are delivered within Japan via Kuroneko's "Cool Ta-Q-Bin" service, ensuring your purchases stay as fresh as they were when they left the store.

Iwasaki Honpo has a small eating area inside the store, but it only has a handful of tables. Depending on the day and the time of your visit, you may find that you have to take your kakuni manju to-go.

Iwasaki Honpo is located only a minute on foot from the Nagasaki Chinatown entrance.

If you're traveling around Nagasaki via the tram network, the closest stop is Shinchi Chinatown Station. Iwasaki Honpo is only two minutes away from the stop itself. 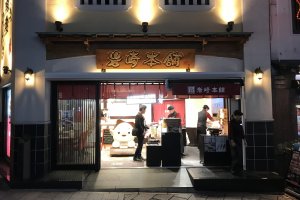 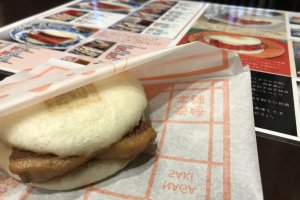 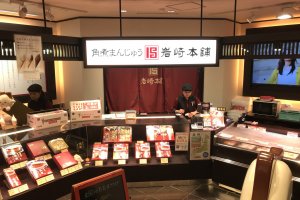 Sleiman Azizi a year ago
That tram network is very, very convenient.
Reply Show all 1 replies

Kim Author a year ago
I totally agree! I grew up in Melbourne, so trams also have me feeling quite nostalgic for home. They really are an enjoyable form of transport.
Reply
2 comments in total