Traditional performing arts can be enjoyed at this annual festival held since the 12th century. Named after the Wakamiya shrine that resides in the larger Kasuga-Taisha shrine complex, this On-Matsuri was originally held to pray for a rich harvest and good health.

One of the highlights is undoubtedly the 'Jidai Gyoretsu' (Period Procession), where 500 volunteers dressed in traditional costume represent the successive eras from the Heian period (9th century) through to the late Edo period (19th century). 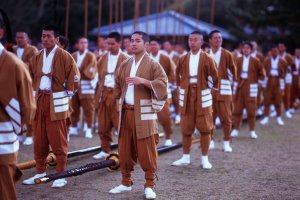 Elena Lisina a year ago
It's nice shrine to visit any time, but with this event it's even more special.
Reply Show all 0 replies
1 comment in total