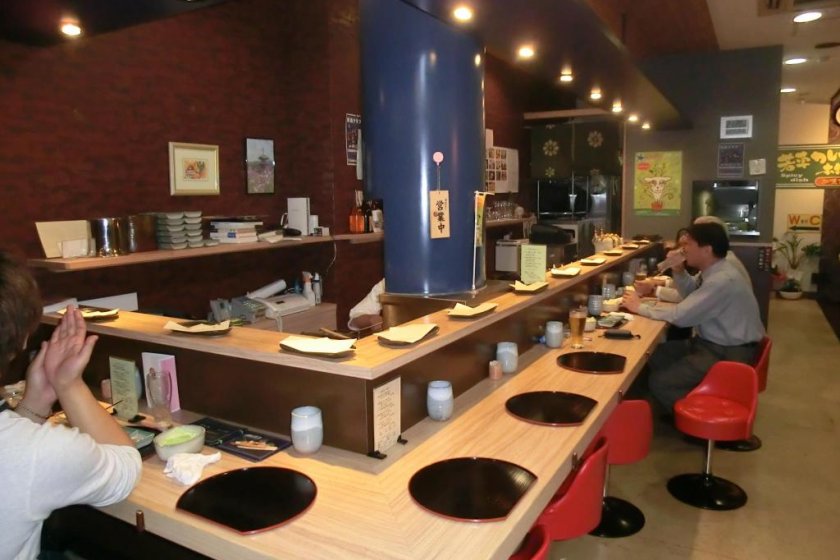 Kushikatsu is a style of cooking in Japan where vegetables or seafood are skewered on small sticks, deep fried in batter and then dipped in sauce. One of the good things about kushikatsu is that it is usually cheap, with one stick going for 150 yen or little more than a dollar, and you can eat as many as you like until you get full.

Going to the back of the Taritsu Kushikatsu restaurant, I was greeted by the owner/chef Mr Tajima, who is used to welcoming foreign guests. He has a bilingual menu that lays out the various courses depending on the size of one's budget and appetite. He recommended to me the beer course, which is a 500 ml (pint) "chu-jokki" of beer, a dish of raw vegetables (radish and carrot, cabbage) and up to six kushikatsu skewers. The "just one drink" set costs 1500 yen. The cheapest set meal he serves costs 880 yen and consists of 4 skewers, rice, miso soup and a salad.

The chef then gave me a dish with some sauces, this included salt and pepper, mustard or "tonkatsu" sauce which is a thick brown sauce usually eaten with deep fried foods such as tonkatsu, kushikatsu etc.  One by one he proceeded to lay each skewer on the plate. He happened to mention that when cooking "ebi" or shrimp many foreigners don't want to eat the legs or feelers as it doesn't appeal to them, so I could choose whether to have the legs cut off before serving them. Other skewers he offered included the gingko nut, octopus, asparagus stick. They were in a word, delicious.

Taritsu has several other courses to choose from, including one which has up to 20 different kushikatsu skewers but if you are full from eating all that and can't eat anymore you can tell him to stop serving and he will total up the skewers he has already served. This course is 2,000 yen, not including beer. Drinks include tea, shochu high balls (shochu and tonic water/water), orange juice or ginger ale.

The second time I visited Taritsu I decided to order the "half" set of 10 skewers, which included a bowl of vegetables as well as a dessert. Normally he places the skewers one at a time on the plate but i asked him to make five at once so I could take a photo which you can see here. The long narrow green kushikatsu is a "take-no-ko" or a young bamboo shoot which comes from Kochi prefecture and is only harvested in the fall/autumn. He boils the bamboo until it is soft and tender and then dips it in the batter. He told me that unlike other take-no-ko the bamboo he uses is square in shape while most regular ones are round. I also had crab's leg, which was very nice, and ordered nihonshu (Japanese sake) which comes in a very nice pottery dish that you drink out of. For ten skewers one beer and a sake the bill came to about 3,000 yen, which is quite reasonable.

There is another Taritsu store in Kita katsuragi-gun in Nara, but is hard to access unless you have a car. The restaurant is open until about 11pm and he accepts most credit cards, including JCB, AMEX. VISA, Mastercard as well as Japanese credit cards. 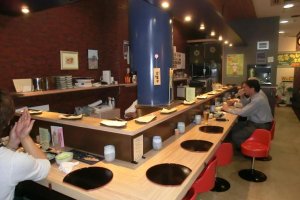 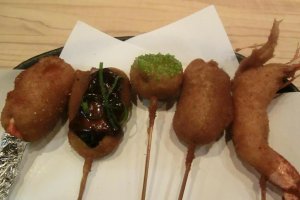 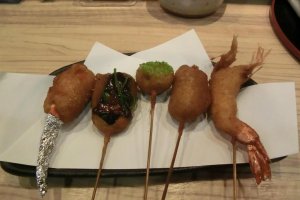 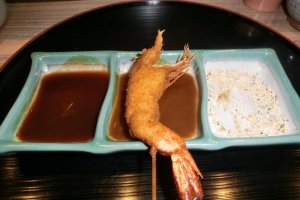 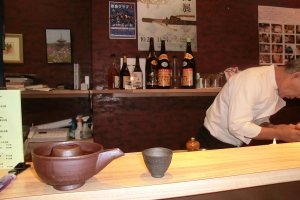 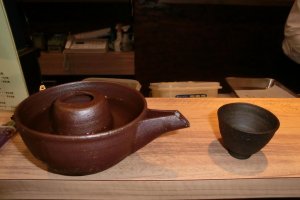