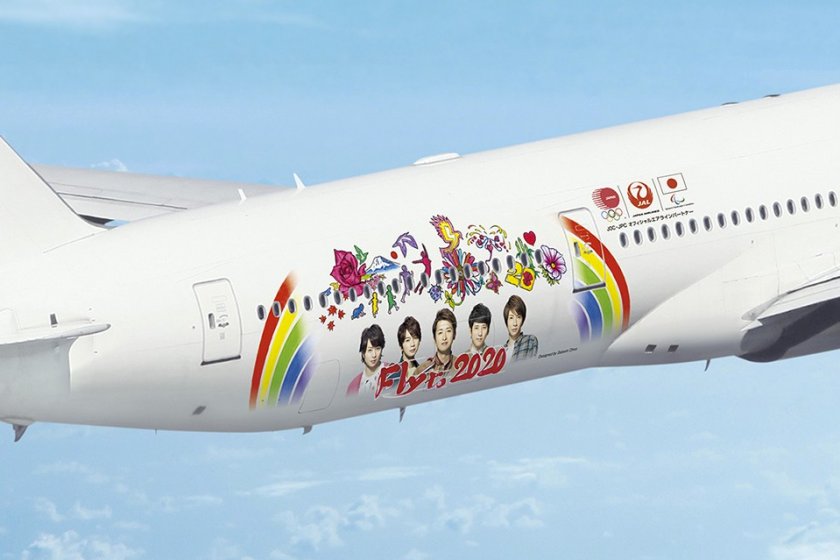 The design of the special aircraft, including the five members of Arashi and drawings by Satoshi Ohno (pictured center) (Photo: Japan Airlines)

Japan's strenuous efforts to promote the 2020 Tokyo Summer Olympics and Paralympics reached an even higher level with the introduction of Japan Airlines' "Fly to 2020" campaign and its special aircraft, designed by popular Japanese boy band Arashi's Satoshi Ohno.

The limited-edition plane is the first of JAL's initiatives as the official airline partner (along with All Nippon Airways) of the 2020 Olympics, with the Fly to 2020 campaign aiming to help the tournament bring hope and energy to the country, while also commemorating the past – JAL transported the Olympic torch to Tokyo the last time the city hosted the Summer Olympics in 1964.

Often described as the "nation's boy band" and arguably the most popular musical act in Japan right now, Arashi also boasts a significant fan base overseas. In addition to being the poster children of Japan Airlines, Arashi has also served as the country's tourism ambassadors since 2010. Ohno, Arashi's leader and lead singer, is known not only for his accomplishments as an idol and actor but also for his artistic talents, with his second art exhibit, "Freestyle II," scheduled to be held later this summer.

In line with the campaign's theme of "hope for the future," Ohno's design includes numerous drawings of flowers, along with a depiction of the evolution of mankind, while also including Japanese elements such as Mount Fuji and the natural beauty of the country's four seasons. Below Ohno's colorful artwork are the faces of the five members of Arashi and the words "Fly to 2020," also written by Ohno himself. Surrounding it all is a rainbow representing Arashi's five colors – red, yellow, green, blue, and purple.

JAL's Fly to 2020 aircrafts are scheduled to operate until March 2016, and service three domestic routes: Tokyo (Haneda)–Sapporo (Shin-Chitose), Tokyo (Haneda)–Okinawa (Naha), and Osaka (Itami)–Okinawa (Naha). Tickets for seats on these planes are sure to sell out quickly and airport observation decks are almost definitely going to be crowded with fans excitedly snapping photographs, so don't miss out if you're an Arashi fan! 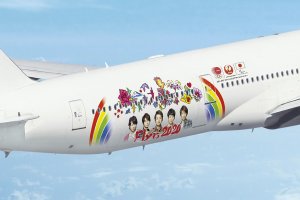 Sherry Gaspay 4 years ago
Good job Ohno! Hoping to beat the March 2016 deadline. Absolutely flying JAL. ^_^ Thanks for this.
Reply Show all 0 replies
1 comment in total