Spring is a big deal in Niigata Prefecture. Many parts of this region get bucketed with meters of snow during the winter months, so those first signs that spring is on its way are cherished. Plum blossoms are one of those first indicators, and a great place to enjoy them is at Hakusan Park.

The park has a plum grove on the grounds, plus several more trees at Hakusan Shrine. Plum blossoms tend to start blooming here around late January, and some varieties are still flowering around mid to late March.

Along with the plum blossoms, Hakusan Park is also a popular destination to enjoy cherry blossom season which tends to be around the mid-April timeframe here.

Niigata's Hakusan Park can be accessed in around 20 minutes on foot from Hakusan Station, which is served by the JR Echigo Line.

For those who plan to drive, there are four dedicated parking lots available, and they are charged at a price of 100 yen per 30 minute increment. 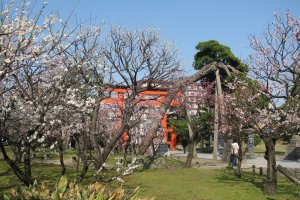