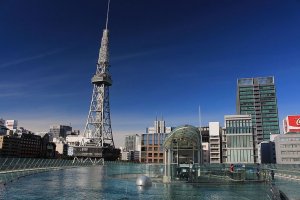 Any fans of Godzilla should immediately recognize the Nagoya TV Tower. The famous reptile destroyed the tower in the 1964 movie Mothra vs. Godzilla and it was again demolished in the 1992 remake, Godzilla vs. Mothra.

When the TV tower isn’t being wrecked by kaiju monsters it serves as an observation tower with two decks—one at 90-meters high and the other at 100-meters up. There is also a restaurant and an art gallery at the 30-meter mark.

Completed in 1954, Nagoya TV Tower is the oldest of its kind in Japan. It’s also known as the Thunder Tower, thanks to the nighttime illumination program. It’s easily admired from the water dome of nearby Oasis 21. The Tower will reopen on September 19, 2020, with hotel rooms available on the 4th and 5th floors.

Nagoya TV Tower can be accessed from Hisaya Odori Station.

Nagoya TV Tower at night provides an impressive view from the top. The Oasis 21, a spaceship shaped building, also glows in th..

Hotel 'the b nagoya'

I would be happy to stay at the 'hotel b nagoya' again. Just like the best waiters are the ones you don’t notice, the ..

HOTEL MYSTAYS Nagoya-Sakae is a hotel among busy streets, so you are never far away from the buzz of Nagoya.

You haven't tried Nagoya's famed Miso Nikomi Udon until you've been to Yamamotoya!

Oasis 21, located above Shin-Sakae Station in Nagoya, is a place for shopping and eating. Opened in 2002, this modern facility is across from Nagoya TV..

The temple Kitanosan Shinpuku-ji Hosho-in in Nagoya, Aichi, is commonly known as Osu Kannon. The temple was originally built in 1333 in Gifu Prefecture,..