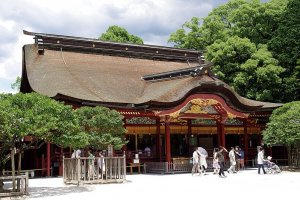 The original shrine was probably built in 905 on the grave of Michizane, who died here in exile, and was expanded over the years by the Fujiwara clan. After a fire, today's shrine was built in 1591 and is considered an important cultural asset of Japan.

The entire area of ​​the shrine extends over more than 12 km² and is home to numerous side shrines of relatives and students of Michizane, more than 6,000 Japanese plum trees and a number of huge camphor trees, some of which are estimated to be around 1,500 years old.

Because of its dedication, people come here primarily to ask for good results in exams and for learning success.

Fukuoka’s Dazaifu Tenmangu Shrine is built on the gravesite of renowned scholar Sugawara no Michizane, and as a result has bec..

Dazaifu Tenmangu is a large Shinto shrine dedicated to the scholar Sugawara Michizane. Students come here to pray for success at..

Plum blossoms herald the start of spring at Dazaifu Tenmangu in Fukuoka Prefecture.

Dazaifu Tenmangu Shrine is one of the most famous attractions in Fukuoka for tourists and locals alike. The shrine is dedicated..

Sightseeing the sprawling area of Dazaifu Tenmangu can leave you feeling a little drained. Rejuvenate at the nearby Hotel Grantia..

Making use of 2,000 pieces of wood batons, the interior of Starbucks Dazaifu is literally cocooned by a weave of cedar wood. T..

Komyozenji Temple (光明善寺) is a Zen temple founded in 1273 by the Buddhist priest Tetsugyu Enshin. The temple is known for its rhododendrons, autu..

Fukuoka Hakatanomori Stadium, also known as the Level 5 Stadium, boasts 22,500 seats, many of which are close enough to the pitch to make viewers feel..

Tenkai Inari Daimyojin Shrine in Dazaifu, Fukuoka Prefecture is an Inari Shrine within the grounds of Dazaifu Tenmangu Shrine. It..