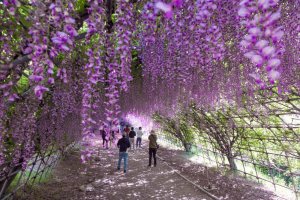 Located in the hills south of Kitakyushu, the Kawachi Fujien is best known for its two 100-meter-long wisteria tunnels through which you can walk. Numerous species are shown here, which are as diverse as white or dark purple The garden is open to the public twice a year: once during the wisteria season in spring and once in autumn.

In spring in particular, the garden's main season falls during the so-called Golden Week, during which many Japanese people go on vacation. As a result, the garden can get full very quickly. So you should definitely have enough time with you to be able to discover everything in peace.

In addition to the tunnels, there are also numerous trees that together form a huge roof of hanging flowers. A vantage point at the top of the hillside garden offers a beautiful view of the sea of ​​wisteria and the surrounding valley, which is also known for its bamboo groves.

One of Kyushu's best-kept secrets: stroll through the stunning wisteria tunnels of Kawachi Fujien and enjoy the dazzling display..

The wisteria tunnels and surrounding gardens of Kawachi Fuji-en draw flower enthusiasts from around the world each spring to Kitakyushu..

The wisteria tunnels are the highlight of Kawachi Fuji-en, a world-renown garden in the mountains of southern Japan with passageways..

Tunnels of wisteria blooms the length of a football field highlight one of Japan's most spectacular gardens.

Through the Wisteria Tunnels

The Kawachi Fuji-en wisteria tunnels are a flower experience like no other, bringing crowds from around the world to this mountain..

Hotel near Kurosaki Station surrounded by green nature. Great location for business and vacation purposes. Great night view of the..

Very convenient and reasonable hotel in Kurosaki. It is located two minutes from the station. Great for both tourists and business..

Rusa Ruka Pancake Café is a quaint European style teashop. It serves savoury and sweet food which ranges from pancakes to pasta.

Kokura Castle is a castle in Kitakyushu, Japan. It was built by Hosokawa Tadaoki starting in 1602, with construction completed in 1608. [Wikipedia]

Free museum that promotes environmental awareness and preservation with movies and activities.