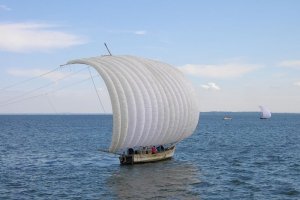 The Kasumigaura Lake, also called Kasumigaura Bay, is the second largest inland lake in Japan and is located 60 km northeast of Tokyo. The city of the same name Kasumigaura lies on the shore of this lake. About 45% of the land that surrounds the lake is natural and 43.5 % are agricultural land.

Today the Kasumigaura Lake is primarily used for fishing, irrigation, recreation and tourism. A variety of fish can be caught in the lake and there are also the Kasumi freshwater pearls, which are known for their high sheen and their rosy hues. In 2006, however, the cultivation was stopped because cheap freshwater pearls from China offered too strong competition.

The water from Lake Kasumigaura is also used to irrigate rice fields in the surrounding area. The main crops are rice and lotus root.

The Lotus Ponds of Kasumigaura

Tsuchiura City is about 50 km or so northeast of Tokyo. It is located near Lake Kasumigaura, which is Japan's second largest..

Shimanami Kaido is one of Japan's most popular cycling routes. The Shimanami Inland Sea is a network of bridges and lanes that..

Each year in April, the Inashiki Tulip Festival is held at Ibaraki's Wada Park. Located on the shores of Lake Kasumigaura (Japan's..