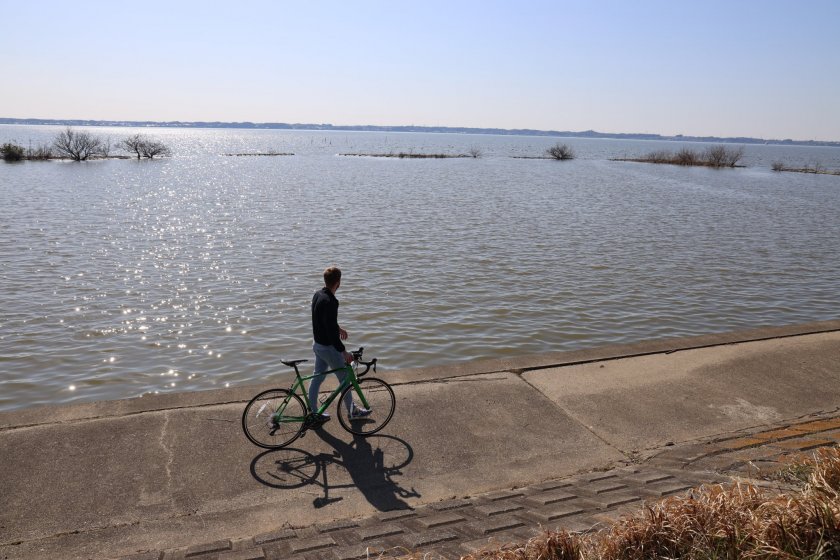 Japan has long been known as a top cycling destination, with the Shimanami Kaido often cited by enthusiasts for the beauty and challenge of its coastal network of bridges and lanes that take in the best views the Seto Inland Sea has to offer on a journey spanning both Honshu and Shikoku islands.

As a nation, cycling itself is well embedded in Japan’s social fabric, with it not uncommon to see waves of people from all walks of life going to and fro by bike — to work, to school, to go shopping or for exercise. Nowhere is this more evident than at Ibaraki’s Tsuchiura, just one hour northeast of Tokyo. Tsuchiura is located at the western edge of Lake Kasumigaura—known as Japan’s second-largest lake—and flanked by Tsukuba to the west. Together they form the main artery of the ‘Tsukuba Kasumigaura Ring Ring Road’, a 180 km cycling path along lakeside routes and former Tsukuba Railway lines.

But central Tsuchiura itself, as a major hub on this cycling grid, is pushing boundaries as a cycling hub, in large part thanks to ‘Play Atre’, a new avant-garde spin on JR’s original Atre department store brand commonly seen at major rail stations.

A cycling trip through Tsuchiura promises a wealth of stops – read on to discover some of the best we found, including the Play Atre facility itself.

The Play Atre Tsuchiura complex is a playground for cyclists – with all shops, cafes and restaurants here fully accessible to cyclists. Through dedicated lanes and parking, both inside and out, it feels like a Japan-first to achieve this level of integration with cyclists’ needs.

A new BEB5 from Hoshino Resorts gears itself as Japan’s first serious cycling hotel on the upper floors, while downstairs you can find Le Cyc, a cutting-edge bike retailer offering a wide range of brand and accessories. Their day rental service stands out too, offering a great service for daytrippers or foreign tourists not necessarily bringing their own gear to Japan.

Underground you’ll find the Ring Ring Square ‘staging area’ for all things bike prep — parking, showers, storage lockers and changing space. Everything you need is here before disembarking on your bike adventure, along the Ring Ring Road.

The Tsukuba Kasumigaura Ring Ring Road network covers 180 km of Ibaraki’s territory, but our focus is purely fixed on heading east along the Lake Kasumigaura Course, of which there are 2 main variants: the shortest 90 km loop or a longer 125 km loop which bends north towards Takahama (a third 73 km course exists in the Kitaura Area but is generally approached separately).

Along the course, 10 locations support bike rental and return – just like Le Cyc back at the station. In addition, 300 Cycling Support Stations are registered to offer basic support, like pumps, tools and bike racks to help visitors on their way. Basically, everything a cyclist could possibly need – courses are even signposted in multiple languages and the signature blue/yellow arrow path also helps guide you on your way.

After departing east from Tsuchiura Station, you can reach Lake Kasumigaura’s shoreline in just a matter of minutes. This is Japan’s second-largest lake and occupies 35% of Ibaraki prefecture’s total area. When the sky is clear, along the route you can expect commanding views of Mount Tsukuba to the north-west and even the tiny spec of Ushiku Daibutsu sitting on the horizon to the south-east.

The lake is also known for its traditional hobikisen fishing boats which can occasionally be spotted in the warmer months between late July and early December. Whizzing past by bike, the sweeping agricultural fields—comprising rice as well as renkon (lotus root)—give you grasp of what goes on locally. The Kasumigaura area is known as Japan’s largest producer of renkon.

This lakeside restaurant is an ideal stop, about 1 hour’s cycle east of Tsuchiura. The concept here very much puts local at the forefront, with local produce dominating the healthy menu and an interior produced by re-using materials for shuttered local elementary schools.

The first floor Kasumi Marche offers locally grown fruit and vegetables, as well as locally-produced souvenirs, gelato, coffee and even food workshops. Nearby you can also find the Kasumigaura City Aquarium and Ayumizaki Observatory – but not ideal stops for cyclists on this route.

The Hirose Shoten (Shiragiku) has been going strong for over 200 years and can be found tucked away in the Takahama area, Ishioka City, just beyond where the mouth of the Koise River meets Lake Kasumigaura. A relatively cold climate and underground water flowing from Mount Tsukuba have helped create perfect conditions for sake production.

Eighth-generation owner, Hirose-san, opens the brewery to pre-booked tours and tastings. The site commands majestic views of Mt Tsukuba — best seen from the rooftop if Hirose-san lets you climb up.

Try the signature brands here, including Hirose Shoten (Shiragiku)’s Seisen, Junmai or Daiginjo, or try the sweet Umeshu (Japanese plum wine) or Yuzushu varieties – don’t miss the chance to grab a bottle direct from the brewery, though note production usually takes place between November and February.

Note: It is illegal to drink sake and then ride a bicycle in Japan – please refrain from any tastings if you have visited by bike.

Cyclists coming from the lakeside Kasumi Kitchen will need to continue east but skip the Kasumigaura Bridge and power on north while chasing beautiful views of Mount Tsukuba on the horizon.

Cyclists heading south along the eastern side of Lake Kasumigaura will be aiming for Kasumigaura Bridge, most easily identified by the Rainbow Tower (Niji no tō) landmark nearby. The Namekata City Tourist Products Centre Koi Koi offers a useful pitstop to cyclists, offering both a local fruit and vegetables market showcasing local products, but also panoramic views of Mount Tsukuba from the outside viewing deck.

Shiraho-no-yu offers a well-timed break point along Ring Ring Road. Cyclists going at a slower pace might wish to find lodgings in nearby Itako City, but this lakeside hot spring can also help recuperate tired cyclists still looking to go the extra mile. Shiraho-no-yu has hot spring facilities, as well as a free footbath and cafe area — there’s a third-floor observation deck too.

Just up the road from Aso Onsen in Tennozaki Park.

It’s flat, spare and perhaps a little non-descript, but offers perfect lakeside views thanks to the pine trees and mini azumaya pavilions.

With Mount Tsukuba on the horizon, it makes for your very own Japan-esque picture postcard when the sun starts to set.

Renkon Sankyoudai ('three brothers'), like the name implies, is a family renkon business run by the three Miyamoto brothers, based in the Ukishima area of Inashiki, towards the south-east corner of Lake Kasumigaura. The low-lying wetlands of Ibaraki’s Kasumigaura region are ripe for lotus root (renkon) production, making it the largest and most well-known producing region in all of Japan.

The Miyamoto family have strived hard to expand their lotus root business, and it is fascinating to directly witness the harvesting and processing if timed right – with some coordination they are also open to offering lotus root harvesting experiences, even if does mean getting quite muddy!

Cycling north-west along your final Ring Ring Road stretch back to Tsuchiura, the route will cut through Kasumigaura General Park providing a quick change of scenery and a final landmark before the final leg. The park is known for its Dutch-style windmill—which you’ll ride straight past—surrounded by tulip fields each April. Park admission is free so you can choose to stop for a break on pedal on back to central Tsuchiura.

After your cycle is done, it’s still worth spending a bit more time in Tsuchiura itself. Kagetsuro is a traditional ryotei-style restaurant tucked away on a side street near Nakajo-dori, known for its old town vibe to the west of Tsuchiura Station. Dating back to 1889, the ryotei has played a core role in the city’s history, having helped host many distinguished guests over the years, including famed aviator Charles Lindbergh in 1931. Two years prior, Tsuchiura itself was put in the aviation spotlight for being a destination on the Graf Zeppelin’s maiden round-the-world flight.

Dine on Japanese fine dining at its best, amid refined tatami surroundings, the feeling of history and even overlooking a miniature Japanese garden from some of the private rooms. The cuisine comprises multiple seasonal dishes based on traditional Japanese cooking and ingredients.

Touemon is an Italian restaurant located in the Tsukuba area of Ibaraki. Entering here was like stumbling upon a hidden gem, within a courtyard paved with white cobblestones and manicured garden, you will find a 190 year old thatched-roof farmhouse, that looks ever so quintessentially Japanese countryside.

However, upon entering the shop you will find an elegant blend of European decor with a Japanese touch. As you walk along the corridor to the dining room you will find the custom-built walk-in wine cellar with a selection of over 50 varieties of mainly Italian wines. The dining room overlooks the beautiful Japanese garden where you can dine with a view.

The owner of Touemon studied as an Italian chef and decided to create this perfect blend of Italian cuisine with influences of Japanese local ingredients. The restaurant serves only course menu options using only local and seasonal products. Each dish is like a work of art and is presented in a way that is almost too beautiful to eat. Once you finally decide to dive into your dish you will understand how much detail has gone into the thought and preparation of the food. The course also comes with freshly baked bread and anchovy butter that is made onsite at their bakery called Kurabiyori located on the courtyard grounds.

Upon leaving the restaurant guests are presented with an orange so if you ever forget the name—Touemon—just mention to someone in the area, the Italian restaurant that hands out the oranges.

Curious about food, local produce and life in Japan's countryside? Head to Ibaraki, situated some 100 km northeast of Toky..

Leave Tokyo for a couple of days and enjoy the change of scenery on a two-day Tsuchiura Cycling Tour. Arrive at Tsuchiura Stat..

Find out more about Lake Kasumigaura. 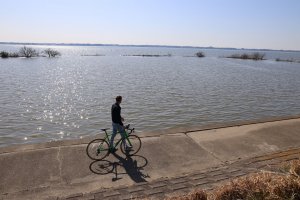 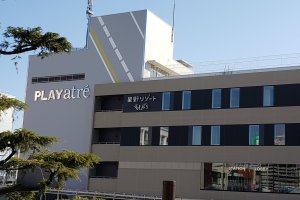 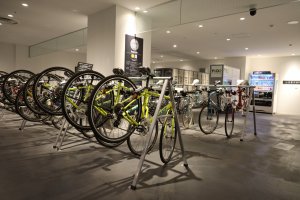 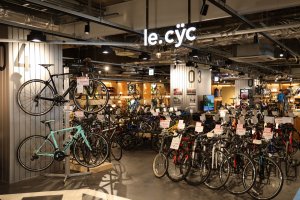 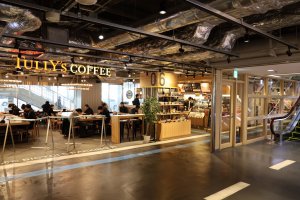 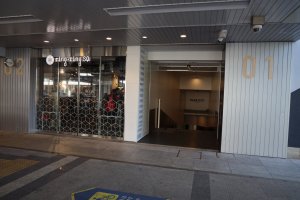 Geraldine Buergel a year ago
Sounds like a great activity for spring/summer! I hope I can make it there this year.
Reply Show all 0 replies

Sébastien Duval a year ago
I enjoyed Lake Kasumigaura area in March, and warmly recommend it to cyclists 🚴
Reply Show all 0 replies

Sherilyn Siy a year ago
Pizza loaded with vegetables looks like such a healthy delicious treat.
Reply Show all 0 replies
9 comments in total
Back to Contents