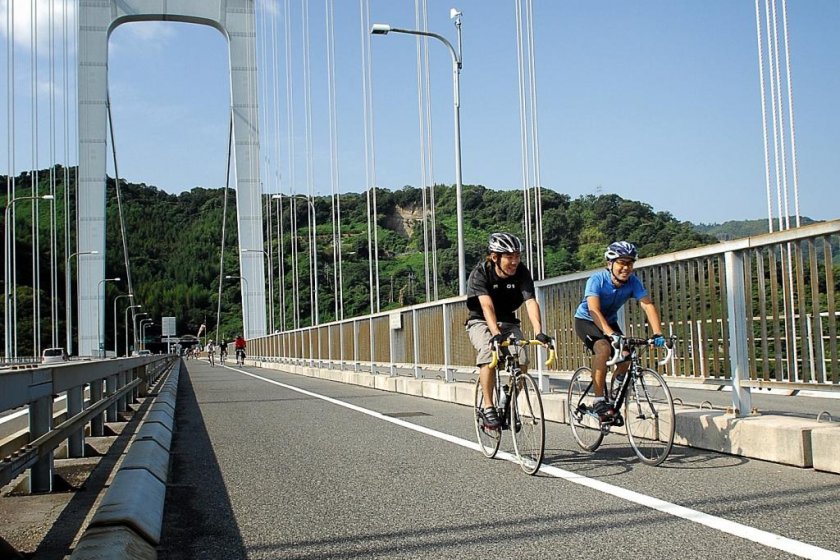 The cycle path across the Seto Inland Sea

Gentle cycling on the Shimanami Kaido

Setouchi Shimanami Kaido, officially called the Nishiseto Expressway is a highway which connects the six islands between Imabari in Ehime and Onomichi in Hiroshima with nine spectacular bridges. The route is about 60 km long. The most unusual feature of this maritime road is that all but one of the bridges have paths for pedestrians and bicycles.

Crossing over the islands of the Seto Inland Sea and enjoying the natural and man-made sights along the way makes a unique and very memorable trip.

Trip on a Rental Cycle
This is an example of a round trip ride on the Imabari section of the Shimanami Kaido.

Sunrise Itoyama
If you want to try cycling, just visit Sunrise Itoyama. It takes about 15 minutes from Imabari Station by car, and parking is free. At Sunrise Itoyama you can rent various kinds of bicycle. There is also accommodation, a restaurant and shower rooms, which are convenient for cyclists. Many cyclists use this place as a starting or end point.

The Kurushima Strait Bridge is the longest bridge of the Shimanami Kaido, and also the world’s first example of three successive suspension bridges in the world.

The total length of the bridge is about 4 km, making it a good ride in its own right. The highest point of this cycling road is about 65 m above the sea. There’s nothing to obstruct your view of the sea and sky, so you may feel as if you’re flying in the sky.

In the middle of the bridge, there’s an elevator that goes down to the little island of Umashima. From here, you can see the bridge up close from directly below, as well as the constant traffic of huge cargo ships right before your eyes.

The Kurushima Strait Bridge → Yoshiumi Iki-ikikan Road Station (about 0.5 km)
When you arrive at Oshima which is the first island after getting off the bridge, you’ll notice a blue line painted on the road. This is a convenient guide for cyclists. You only have to follow this line to go to Yoshiumi Iki-ikikan Road Station. Here you can take a rest and enjoy a soft ice cream made with local salt, a seafood barbeque, Imabari yaki-buta-tamago-meshi, or browse for souvenirs. In the water tank, you can see Kobu-chan, a fish who is very popular with visitors.

From Yoshiumi Iki-ikikan, you can also take a little boat to experience the rapid current that flows between the islands. Go under the bridge which you just crossed. The boat leaves from Hashihama Port with its many shipyards. Shipbuilding is one of the main industries of Imabari, and the view of the new ships from the sea is just awesome.

Yoshiumi Iki-ikikan → Yoshiumi Rose Park (about 7 km)
Head clockwise around Oshima, enjoying the view of the islands of the Seto Inland Sea on the level road. You soon come to Yoshiumi Rose Park, where 3,500 roses in 400 varieties are planted. These beautiful roses bloom from the middle of May to early June, and from the middle of October to early November. Here you can buy soft ice cream and perfume scented with rose.

Yoshiumi Rose Park → Yoshiumi Iki-ikikan (about 6 km)
Go clockwise along Route 317 back to Sunrise Itoyama again. Just follow the blue line and you’ll never lose your way. If you still have enough energy, why not visit Mt. Kiro observation deck where you can get a superb view of the Shimanami Kaido.

Yoshiumi Iki-ikikan → Kurushima Strait Bridge → Sunrise Itoyama (about 6.5 km)
On the leisurely ride back, you can enjoy different views of Setouchi, such as the view of the opposite side of the bridge, the spectacular tidal currents, and the sunset.

After your half day of cycling, you can take a shower at Sunrise Itoyama so you can go home refreshed. On weekends and public holidays, the bridge is illuminated. Enjoy the night view of the Kurushima Strait Bridge with dinner at the restaurant in Sunrise Itoyama.

The total length of the Shimanami Kaido cycling course is about 70 km. (To reach Onomichi at the last stretch, you take a ferry.) Each island has its own sightseeing spots and you can enjoy a wide variety of views and moods according to the season. The Shimanami Kaido attracts many repeat visitors from overseas, who have become enchanted by the dramatic beauty of this unique route. Shimanami Kaido is becoming known as one of the best cycling spots in the world. Come and experience the freedom of cycling the Shimanami Kaido for yourself. 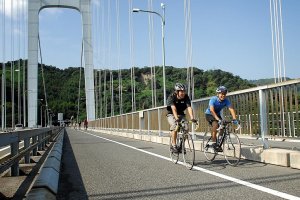 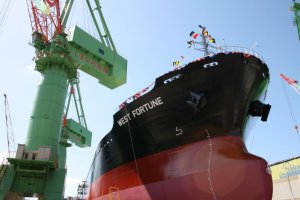 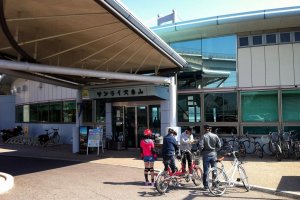 Isabelle Despert Okumura 3 years ago
Thanks for this vey interesting article. Can you tell me if it is easy to stop on the way (cycling path) for taking photos ? Thanks!
Reply Show all 0 replies
1 comment in total