A guide to the best routes for jogging

"Life is complicated. Running is simple. Is it any wonder that people like to run?" - Kevin Nelson

Tokyo is one of the world’s largest and most densely populated cities that continues to fascinate travelers with its intriguing ability to blend tradition with trend-setting, history with high technology. It is no wonder that running Tokyo is in the bucket list of many travelers who run. With some planning, you can enjoy the sense of discovery that comes only when you lace up your running shoes and step outdoors. Choose from these top 5 routes to see this exciting city from a different perspective.

The Imperial Palace circuit is the most famous and most popular running route in Tokyo and if you could afford to do only one run during your stay, this should be it. One loop around the the palace is the perfect average runner’s run of 5 km, with no stop lights. The counter-clockwise route is beautiful, day or night. Only here can you enjoy an uninterrupted view of the stately palace grounds to your left, and the towering buildings of the business and commercial districts to your right. With so many points of interest along this circuit, you will want to come back and explore more leisurely later.

Green may not be the first word you would think of to describe Tokyo, but it will be when you discover the Meiji Jingu Gaien running course. This route starts in Hirakawacho (near Runbase) and takes you down the affluent, landscaped neighborhood of Akasaka, past the grounds of the Akasaka Palace, a majestic Neo-Baroque Western style building originally built for the Crown Prince in 1909, and slightly uphill to the hip and verdant Aoyama Itchome. Stopping here and turning back is a little more than 5 km but going around the Gaien loop—where many sports facilities are located and being redeveloped for the Tokyo 2020 Olympics—adds an extra 1.3 km to your run. At night, enjoy the illumination of the memorial building. This Green City Run turns to brilliant yellow, red and orange in the fall.

What could be more charming than a 3.5 km stretch (7 km round trip) of river covered with the generous foliage of cherry trees leaning over it? Meguro River is one of Tokyo’s celebrated spots during the sakura season. While spring is probably its most breathtaking season, this dedicated pedestrian trail between Ikejiri-Ohashi Station (Den-en Toshi Line) and Meguro Station (served by multiple lines) is still delightful in that off-the-beaten path way all year round. Pass by quiet residential areas, small cafes and restaurants, bridges, parks, temples and museums.

Nothing says you’re on vacation like a run along the waterfront to take in the expansive views of sea and sky. Just across the Rainbow Bridge from central Tokyo is a large artificial island in Tokyo Bay where you can do just that. Odaiba was originally built in the 1850s to fortify the city’s defense but later developed into a major leisure area. Beginning at the Marine House, you can get in a 3, 5 or 7 km run here. Running maps are available here. It is best accessed by Daiba Station on the Yurikamome Line.

Runners who are looking for a long, uninterrupted stretch would be happy to know that the Arakawa River has a paved trail in the northern part of downtown Tokyo that heads west up to almost 40 km. There are distance markers and water fountains along the way. Of course you don’t have to run the entire distance and thanks to good train access, you can start at one point and stop and hop on the train at another. Bonus: Enjoy a view of the Tokyo Skytree and watch it change colors at night. This trail is popular among cyclists so be careful when running. 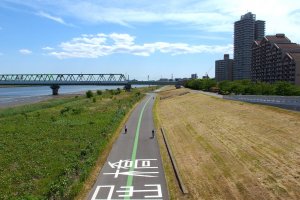 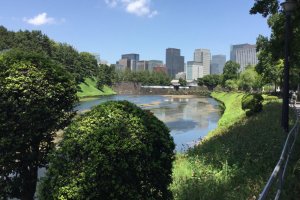 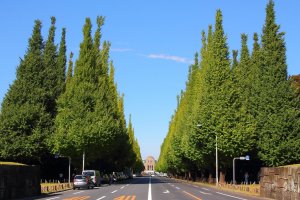 Sébastien Duval 2 years ago
The Arakawa River Trail is great! I ran there on Friday evenings and Sunday mornings when I lived in Tokyo Adachi ward :)
Reply Show all 0 replies

Kim 2 years ago
I haven't done the Meguro River run, but I imagine it would be stunning in the spring!
Reply Show all 0 replies
2 comments in total
Back to Contents