Basics of Running in Tokyo

A practical guide to exploring while keeping fit

Every day is a good day when you run.
- Kevin Nelson

There is nothing quite like exploring the city on an early morning run before the hustle and bustle. It is a great way to shake off jet-leg, clear your head, and get yourself ready to meet the challenges of the day. Running in Tokyo can seem daunting to someone who may not speak, let alone read, Japanese. Add to this the fact that most streets do not have names and that Tokyo is not laid out according to a grid system. It is easy to feel lost in some maze. But keep in mind, the city functions just fine and so can you with a little preparation.

Here are some helpful pointers to have a great run in one of the safest cities in the world:

Run a straight route to a specific point and back, and avoid making multiple turns. It is very easy to become disorientated as streets meander and you are not able to orientate yourself with the sun. Running down and out will mean you are going to see some of the same scenery and buildings, but you will not have the anxiety of not knowing where you are. If you want break things up, crossing to the opposite side of the street is helpful.

Identify unusual buildings, interesting shops, or inviting parks and mentally mark them off on your return jog to your hotel or accomodation. This will give you a point of reference of where you are and how far you have to go. They also may give you ideas on what you might want to explore later.

Before you set off decide how far you want to go. Is it a certain distance or time? Of course, any experienced runner will know this. But in Tokyo, for the same distance, you might spend more time out there than you expect because there are so many stop lights. Jaywalking is frowned upon in Japan. Your 10 km in the heart of the city is going to be significantly slower than what you are accustomed to. But you are about exploring, not racing, so this should not matter.

Tokyo can be extremely hot in the summer and unless you bring your own water, you might be in trouble. Occasionally, you might find a water fountain in a park, but that is the exception, not the rule. You can expect vending machines or convenience stores on almost every block (except the Imperial Palace circuit, but there are water fountains available there). ¥150 should cover a sports drink that will tide you over. If you don't like coins jiggling in your running shots, a Suica or PASMO card works in all convenience stores and some vending machines, and they can get you a ride home if you feel too tired to run back.

Sidewalks are shared with bicycles and other runners so it's best to leave the headphones at home so you can hear if someone behind wants to pass you. Besides now is the time to enjoy the distinct sounds of the city.

You will notice that Japanese runners tend to dress in layers even when running in the summer. They will wear a pair of running shorts over full length leggings, a t-shirt over a long sleeved top. You do not need to dress similarly but note that running in a sports bra will get you stares and make others uncomfortable. It's best to err on the side of modesty.

Koban are police boxes dotted throughout the city. They are usually manned and the police are actually quite helpful in getting you back on course if you feel lost. Keep your hotel’s business card and they can point you in the right direction.

Have fun exploring while keeping fit! 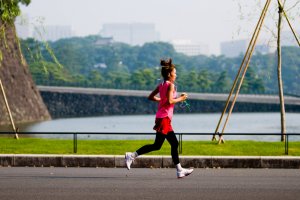 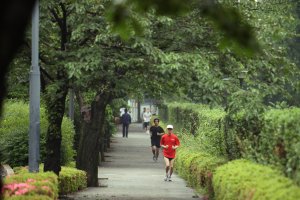 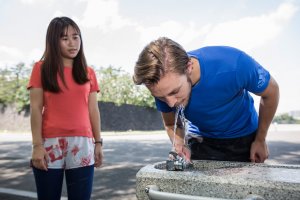 Chris a year ago
Do you recommend any specific running spots?
Reply Show all 1 replies

Kim B a year ago
Thank goodness for vending machines!
Reply Show all 0 replies
3 comments in total
Back to Contents