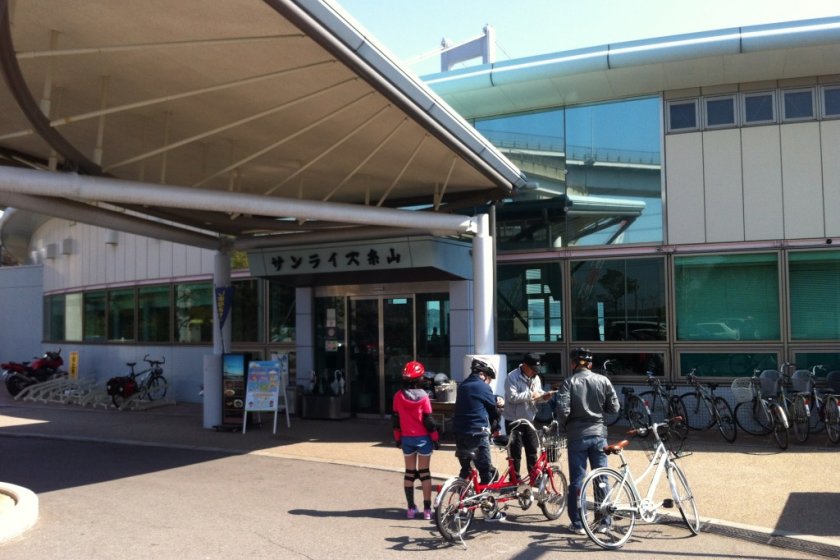 A cycling idyll, pedaling over bridges and islands

A family returns their rental bikes at Sunrise Itoyama

The Seto Inland Sea is a shallow sea separating the island of Shikoku from Honshu, the main island of Japan. A chain of islands, large and small, straddles the sea between Imabari in Ehime, and Onomichi in Hiroshima. This route is linked by the Shimanami Kaido, a highway with spectacular suspension bridges over the sea passages. The border between the prefectures of Ehime and Hiroshima lies right in the middle.

The highway is part of Japan’s expressway system, and tolls are levied for vehicles of all types. Unlike most expressways, the Shimanami Kaido has a lane for pedestrians and cyclists, although these are restricted to the bridge sections of the highway. Where the highway crosses an island, the pedestrian lane peels off and descends a looping ramp while the expressway plows on in a somewhat straight line, plunging into tunnels here and there through mountains. The pedestrian ramps up to the Kurushima Channel bridge are the longest on the route.

The ability to cross this spectacularly beautiful island route on a bicycle offers an amazing bonanza for cyclists of every sort, from casual day trippers, to serious riders who long to eat up the miles. It’s also very attractive for motorists and motorcyclists too of course, but going by bicycle allows you to stop and gaze at the scenery whenever you please, and to peer over the railings at the sea and ships below.

Although it’s possible to complete the route in a single day, it’s best to plan on dedicating some time to the route itself for exploring the islands. Since most of the motor traffic is on the highway, the roads on the island are safe and quiet. Cyclists are free to ride on the sidewalks too.

For cyclists without their own bikes, there are rental stations at the start and end of the route offering mountain bikes, cross bikes, road racers, shopping bikes with gears and baskets, kid’s bikes, and even tandems and electrical-assist bikes. At 500 yen a day with a 1,000 yen deposit, rates are very reasonable. The price even includes a helmet. There are also rental stations at convenient intervals along the route and you can leave a bicycle at any of the stations. However, if you leave the bike at a station other than the one where you rented it, you forfeit the deposit. An electrical-assist bike costs 800 yen for up to 4 hours and must be returned to the place where you borrow it.

Each of the cycle rental terminals provides an excellent pamphlet in English with a map which shows the terminals, sightseeing spots, distances, recommended routes, elevations, prices—gosh, you name it, it’s in the pamphlet.

The total distance from Imabari to Onomichi is a fairly hilly 70 km so if you plan to do it in a day, you need to be reasonably fit, but there’s no particular need to do the whole thing. There are cyclists of all ages and levels on the route, some just pootling across a bridge or two, others racing along in a blur of spandex and whirr of gears. Take protection against the sun and wind and cold, and make sure you get plenty to drink, whatever the season. There are drinks vending machines on all the islands, but not on the bridges. And if you’re thinking of doing a cycling and rail type of holiday in Japan, please bear in mind that currently, only folding bikes in a bag are allowed on Japanese trains. 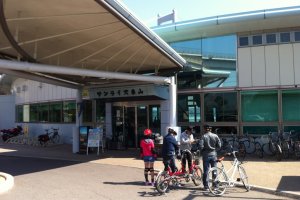 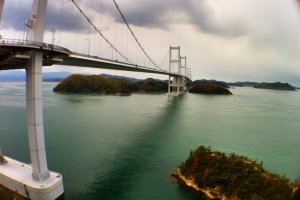 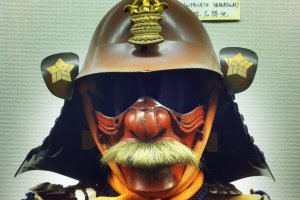