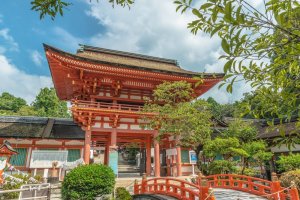 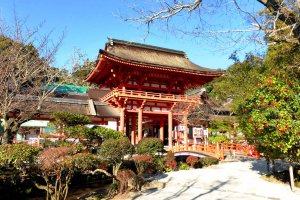 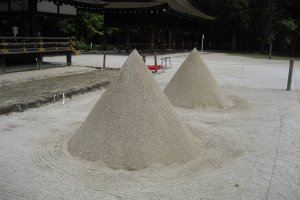 The Kamo Shrines, Shimogamo Shrine and Kamigamo Shrine are both recognized as UNESCO World Heritage Sites. They are two of the most important and oldest shrines in Kyoto. They are located in the north of the city and are intentionally placed to ward off evil and Protect the city In fact, the two Kamo shrines are even older than the city, which became the national capital in 794.

Shimogamo Shrine is located at the confluence of the Takano and Kamo Rivers and is surrounded by a forest that contains trees up to 600 years old. The Kamigamo Shrine is about three and a half kilometers upstream and is known for two sand cones on its site, which have a cleaning function for the sanctuary and have been ritually made since ancient times.

Together the shrines host one of Kyoto's three biggest festivals, the Aoi Matsuri, which takes place on May 15th.

Romon Gates (Tower Gates) are imposing red structures built to mark entrances to important places in Japan. In Kamigamo Shrine, visitors cross a small red bridge over the water to get to the Romon Gate. The gate stands at the entrance to the Honden and Gonden buildings that lie within. Unlike torii gates, there are only a few sites in Japan that have Romon Gates.

Tatezuna are the large conical sand mounds sitting at the entrance of the main shrine building. It is said that their conical shape was constructed to represent the sacred Mt. Kouyama. Mt. Kouyama is the mountain in which the patron deity of Kamigamo Shrine is said to have descended from. The Tatezuna of Kamigamo Shrine are allegedly the inspiration for the practice of forming sand mounds or scattering sand at new construction sites to ward off evil.

Reconstructed in 1863, the Honden is the main shrine building. Gonden is an exact replica of the Honden, built as a backup for the shrine deity in case of any damage done to the original. Both are designated as National Treasures. Every year on May 15, Kyoto’s Aoi Matsuri is held at the Honden building.

20 minutes on foot from Kitaoji Station

Kamigamo Shrine was established in 678 and is one of the oldest in Japan. Set in a large park, this World Heritage Site is well..

Kamigamo Shrine located in the north skirt of Kyoto, is a famous healing power spot. And the Inner shrine, Kataoka-sha, enshri..

Kamigamo Shrine: A Place of Healing

HEALING SPOT: Kamigamo Shrine is known for its strong healing power. And before Kyoto became capital of Japan, it was already ..

The Aoi Matsuri is one of the oldest and most celebrated festivals in Japan. So much so, the word “Matsuri” originally referre..

In the Aoi Matsuri, ladies dressed in the ceremonial court robes and men in traditional costumes ride on ox carriages decorated..

The Aoi Matsuri is one of the oldest and most celebrated festivals in Japan. So much so, the word “Matsuri” originally referre..

The Kamo Shrines, Shimogamo Shrine and Kamigamo Shrine are both recognized as UNESCO World Heritage Sites. They are two of the most important and oldest..

Well known as the Golden Pavilion, Kinkaku-ji is a three-story Zen Buddhist temple in northern Kyoto. Kinkaku-ji and Ginkaku-ji (Silver Pavilion) were..