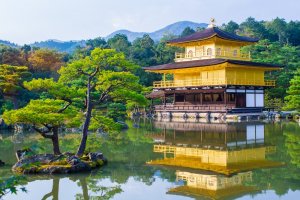 Well known as the Golden Pavilion, Kinkaku-ji is a three-story Zen Buddhist temple in northern Kyoto. Kinkaku-ji and Ginkaku-ji (Silver Pavilion) were built in the 13th century and were originally intended as noble villas for the Ashikaga shoguns. Today the building is also known as Rokuon-ji.

Kinkaku-ji houses several important Buddhist relics and is a sacred place for the Rinzai sect of Japanese Buddhism. Each floor of the temple conveys a different architectural style. The first floor is in the Shinden style, the second floor in the Bukke style and the third floor in the Chinese Zen style. Thus became one of the most photogenic temples in all of Kyoto.

The temple was once the retirement villa of the shogun Ashikaga Yoshimitsu. After his death in 1408 he wanted to give the building to the Rinzai sect as a Zen temple. The grounds of the Kinkaku-ji Temple used to consist of several other buildings, but unfortunately burned down in the fires and destruction during the Onin War in the 1400s. The building you see today was also rebuilt in 1955.

Kinkakuji Temple is also known as the Golden Pavilion in northern Kyoto. The top two floors of the pavilion is covered in gold leaf..

Kyoto Kinkaku-ji Temple: The shining golden pavilion and double-layered garden are both splendid!

The golden beauty of Kinkakuji accentuated even further by snow

The Golden Pavilion is on of the most recognized sights in Japan. See the gold-leafed structure in all its glory.

The Spirit of Kyoto

Kyoto is rich with temples, shrines, souvenir & gift shops, people dressed in kimono and other attractions, but there are also many..

Kinkakuji, more commonly known as the Golden Temple, is as beautiful as it is enigmatic. Originally constructed as a villa, so when..

Kyoto's most famous temple, the Golden Pavilion, Kinkaku-ji, shines even in stormy weather. Take a virtual visit here on a rainy..

Kyoto was named the world's best city by Travel and Leisure in 2014, and when you visit gardens like Kinkaku-ji (also called..

A rare and beautiful view of the frozen pond around the serene Golden Pavilion in Kyoto.

All That Glitters is Gold

Article extracted from "Revolutions" about travelling in Japan. This time we cover Kyoto's Golden Pavilion.

Known for its academic blessings, Kitano Tenmangu is a Shinto shrine in Kyoto’s Kamigyo ward that is dedicated to Sugawara no Michizane, an influential..

Ryoanji Temple is home to Japan’s most famous Zen stone garden and one of Kyoto’s most iconic scenes. Believed to be built back in the Muromachi period..

Ninna-ji Temple was founded in 888 and is a Buddhist temple in northeast Kyoto that is closely associated with the imperial family of Japan. It is the..