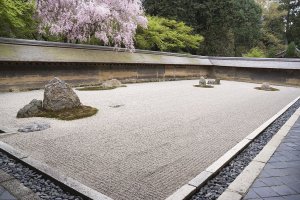 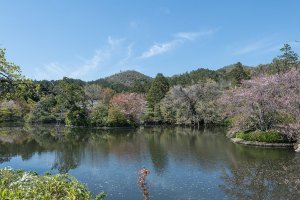 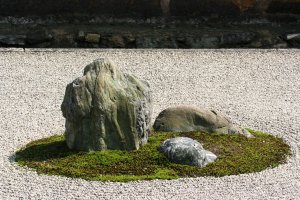 Ryoanji Temple is home to Japan’s most famous Zen stone garden and one of Kyoto’s most iconic scenes. Believed to be built back in the Muromachi period (14th - 16th century), the origin and designer of the garden is still unknown to this day. The stones in the garden are intentionally placed so that one cannot view all 15 stones from any one angle.

The meticulous design of this karesansui (Japanese rock garden) leads many to credit the celebrated artist, Soami, as the garden’s creator—albeit unproven. The 248-square meter garden bears little trace of greenery, and is instead immaculately lined with raked white gravel. The seemingly random placement of the stones adds to the mystique of Ryoan-ji, its abstract layout leaving visitors questioning the meaning and purpose of the garden.

While the garden remains a mystery, the history of Ryoanji Temple is well documented. The temple buildings were originally a Heian Period villa, and were converted into a Zen temple in 1450. Now, Ryoanji is part of the Myoshin-ji school in the Rinzai sect of Zen Buddhism.

In 1994, Ryoanji’s immaculate zen stone garden was recognised as a UNESCO World Heritage Site, and is also designated as a Historic Monument of Ancient Kyoto.

One of the finest examples of dry landscape gardens, Ryoanji Temple’s stone garden is a sight to behold. Comprising 15 differently shaped stones, the garden’s unique layout contributes to the illusion of depth, allowing visitors to enjoy a dynamic view of what would usually be “just rocks”. If you look closely at the backs of each stone, you might be able to discover a clue to who the unknown creator is!

This massive pond is located in the southern area of the temple grounds. Back in the Heian period, it was said that the pond was a popular place for nobles to visit. A large variety of different plants surround the pond, as the temple priests of each generation took care to plant them. As a result, the view of the Kyoyochi Pond is magnificent in both spring, summer and autumn.

The Stone Garden at Ryoanji Kyoto

Ryoanji is the most celebrated garden in Japan. Simple yet powerful at the same time, it draws pilgrims from all over the world

At the foot of Kinugasayama is the famed Ryoan-ji temple with its rock garden, Bojotei-en. Ryoan-ji is designated as a UNESCO ..

Since Queen Elizabeth II visited this rock garden and highly praised it in 1975, huge numbers of people have flocked to Ryoan-ji..

Ryoanji: Temple of Dragon at Peace

Kyoyochi Pond at Ryoan-ji Temple in Kyoto was once more famous than the internationally renowned 'Rock Garden'.

The Rock Garden of Ryoan-ji Temple

In June this year, I visited Ryoan-ji Temple, the temple of 'Rock Garden', and enjoyed the beauty of it surrounded by fresh..

Set in a large garden with a pond, Ryoan-ji is the home of Japan's most famous Zen Garden. Sit in quite contemplation and maybe..

Ninna-ji Temple was founded in 888 and is a Buddhist temple in northeast Kyoto that is closely associated with the imperial family of Japan. It is the..

Well known as the Golden Pavilion, Kinkaku-ji is a three-story Zen Buddhist temple in northern Kyoto. Kinkaku-ji and Ginkaku-ji (Silver Pavilion) were..