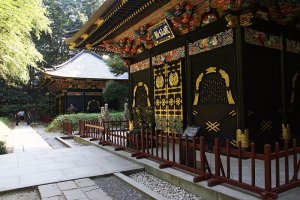 Built in the 17th century during the Edo period, Zuihoden Mausoleum (瑞鳳殿, Zuihōden) in Sendai, Miyagi Prefecture is the resting place of Date Masamune who was a powerful daimyo and the founder of Sendai. The influential feudal lord ruled over the Sendai Domain from nearby Aoba Castle (Sendai Castle), which he constructed in the early 17th century. Date Masamune’s son and grandson, Date Tadamune and Date Tsunamune, are also entombed at the Zuihoden complex in nearby mausoleums (Kansenden and Zennoden respectively), while other descendants are buried in more simplistic tombs and graves.

In order to prevent the spread of the new coronavirus infection, the mausoleum will accept up to 100 people per hour for group customers, and 25 people each for the museum.

Although the original mausoleum was destroyed during World War II, it was later restored to its former grandeur, and today, Zuihoden is still a visually mesmerizing sight. The collection of tombs are decorated intricately with blue, green, red, and gold, giving Zuihoden an air of opulence characteristic of the Momoyama art style. The area is also populated by enormous cedar trees, which weave seamlessly through the sacred and tranquil grounds. Nearby Zuihoden’s main buildings is the Zuihoden Museum, which displays family artifacts from the Date clan, including weapons, documents, and even family bone fragments and hair.

A beautiful monument to mark the resting place of Sendai's founder, Date Masamune, surrounded by nature that marks the passing..

Zuihoden is the mausoleum of the first feudal lord of Sendai. Its mausoleums feature rare Momoyama style architecture in a set..

The Zuihoden Mausoleum enshrines the founder of the Sendai Domain, Date Masamune. A superb example of elegant, gorgeously decorated..

Visit Zuiho-ji, a temple at Kyogamine Park next to the mausoleum of Date Masamune, a powerful feudal lord during the Azuchi-Momoyama..

Why not review more places in Miyagi?

If you're looking for a luxury western-style hotel in Sendai, you can't beat the Westin for location and class. The staff..

In the downtown heart of Sendai in northern Japan's Miyagi prefecture, Almont Hotel is a stylish, comfortable and affordable..

Vegeto LIKO is a vegan restaurant in Sendai City, Miyagi Prefecture. The entire menu is vegan and ingredients are organic when possible...

Miyanobori is a chanko nabe restaurant located in a side street of Sun Mall pedestrian arcade in Sendai, Miyagi Prefecture.

Ōsaki Hachimangū is a Shinto shrine in Aoba-ku, Sendai, Miyagi, Japan. The main shrine building has been designated a National Treasure of Japan. [W..

Lu Xun, the great thinker and novelist in China, studied in Tohoku University from 1904 to 1906. You could still see the very classroom..