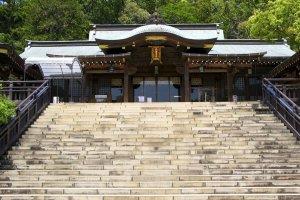 The Chinzei Suwa Shrine has a long and complicated history. It began in 1614, the same year as Tokugawa's Edict Against Christianity. The shrine was established to unite the community against the growing population of Christian-converted Japanese in the area who the number of Shinto and Buddhist populations exceeded, and many local Christians resolved to destroy the shrine's progress until a priest, Aoki Kensei, came to Nagasaki in 1624 and stopped the interference.

The shrine was later used as a census site in 1634 and required Christians to register and renounce their beliefs or face extreme punishments and, in severe cases, death.

Ride the streetcar to Suwa Jinja and climb the 277 steps to the shrine.

Suwa Shrine is Nagasaki's premier Shinto shrine. Built in the 1600s, the shrine is an important spiritual centre and contains..

Elv is a quaint cafe, situated in the heart of Nagasaki city. With delicious food and wonderful staff, it is sure to capture y..

Nagasaki Shinchi Chinatown is the oldest of its kind in Japan. There are only three Chinatowns in Japan. The district in downtown Nagasaki extends over..