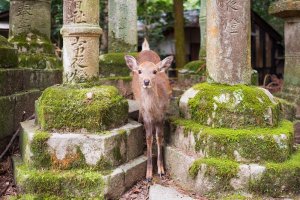 Nara Park was created in 1880 and is located in the city of Nara, which is easily accessible from Kyoto or Osaka. The vast area extends over 660 hectares and is known for its free-roaming deer and world-famous temples.

Founded in 1880, it is home to many of Nara's top attractions, including Todaiji, Kasuga Taisha, Kofukuji, and the Nara National Museum. The game can be fed special treats and some animals even bow to the visitors. The more than 1000 deer from Nara, which are considered messengers of the gods, have become a symbol of the city and are even called a natural treasure.

Nara Park is located just around 5 minutes of walking from the JR Kintetsu-Nara Station.

A Walk through Nara Park

Playing with hundreds of deer and watching the beautiful koyo in autumn are some of the attractions that you can enjoy for free..

In Nara Park you can visit few traditional Japanese gardens like Isuien and Yoshikien.

The Deer of Nara Park

Looking for a relaxing yet fun activity in Nara? Have a walk with one of the thousand deer in Nara Park!

One Day in Nara Park

Just one day spent in Nara Park can create a lot of impressions from its beautiful gardens, old temples and the special atmosphere..

Todai-ji Temple, also known as the Great Eastern Temple, was originally built in 752 at the behest of Emperor Shomu. It is one of the most famous and..

The great Kasuga Shrine (Kasuga Taisha) is located in Nara Park. It was built at the same time as the capital and is dedicated to the deity responsible..

Luxury hotel in the heart of Nara Park, located near Kofukiji and close to Araike lake.

Never could I imagine that there could be hostels like this one In Nara, Japan

During the summer season, at Kurokawa Honke (黒川本家), located in Nara city, many dishes with arrowroot incorporated, like th..

A Gift of Food from Nara

Nara has a long and rich history, and it shows in the amazing variety of food unique to the area.

NARA Visitor Center & Inn is located by the Sarusawa Pond in Nara City, a short walking distance from Kintetsu Nara station and Nara station. It is the..

Yakushiji Temple is regarded as one of the oldest and most important temples in Japan, which is no surprise given its impressive status. The temple is..