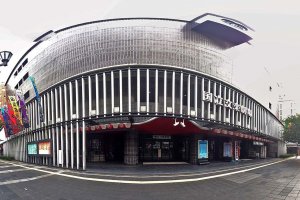 Osaka has been the capital of Bunraku, the traditional Japanese puppet theater, for many centuries. The National Bunraku Theater is a two-hall and exhibition room complex located in Chūō-ku, Osaka. The theater is now one of the few places where where the fascinating art form of bunraku can be seen.

The complex opened in 1984 as the country's fourth national theater and became the headquarters of the Bunraku. The National Theater is operated by the Japanese Arts Council, an independent administrative body of the Ministry of Education, Culture, Sports, Science and Technology.

The National Bunraku Theater in Osaka will be hosting a bunraku for beginners event and performance in mid-June.

Traditional Japanese Theater - an Introduction to Noh, Kabuki and Bunraku.

The 60’s are now in the oh-so distant past but the essence of this magic era still remains. Surrounded by the modern neon glow..

Located in Osaka, Neko-Yokujo and Neko-Hatago is a cat cafe and dormitory-style inn designed for cat rescue. The cafe and inn feature..

Clean, comfortable beds, elegant décor, close to public transport, helpful staff - The Fraser Residence has them all in spades.

A Pizza House in Nipponbashi

On my longevity pilgrimage around Japan, I am reminded that it is not just about hiking in rainforests, or searching for those hard..

Creo-Ru means creation, where you can create your own okonomiyaki with any ingredient. Since opening in February 1999, they have..

Among the hustle and bustle of Osaka’s renowned shopping and foodie street, Dotonbori, lies a cobblestone alleyway, Hozenji Yokocho, that leads visitors..