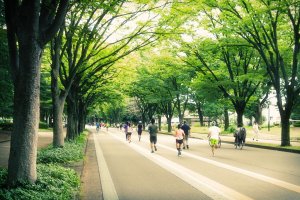 Komazawa Olympic Park, located in both Meguro and Setagaya, Tokyo, is a sports facility built for the 1964 Summer Olympics. Approximately 90 percent of the park area is in the Setagaya district, while the remaining 10 percent is in the Meguro district At the beginning of the 20th century, the area served as a golf course, on which even Emperor Hirohito and King George V of England were invited to a game.

The extensive grounds offer several sports facilities, including baseball fields, tennis courts, a swimming pool and a sports hall. There is also a stadium for 20,000 people, which is a venue for both soccer and American football games. There is also a very nice route that is ideal for jogging or cycling.

The One Love Jamaica festival is an annual summer event that will be held at Aeon Mall Makhuhari in Chiba this year. Come soak up..

The incredible, 'futuristic' Olympic Park, Komazawa Koen, home to the 1964 games. A great place for some serious sports..

Komazawa Park offers excellent recreational facilities and was also a significant venue for the Tokyo Olympic in 1964.

Komazawa Olympic Park was used as a second venue of the Tokyo Olympic Games in 1964.

The One Love Jamaica festival is an annual summer event that will be held at Aeon Mall Makhuhari in Chiba this year. Come soak up..

Niku Fes Tokyo celebrates all things meat. There will be a range of both domestic and international meat-based dishes to enjoy at..

The Craft Gyoza Festival brings a variety of dumpling types from across the country to Komazawa Olympic Park, with some of the options..

Sangenjaya is an area within the Setagaya district in Tokyo. The name Sangenjaya means "three tea houses", but the locals often refer to it simply as..

The Todoroki Valley is an attractive hiking trail that runs for about a kilometer through a narrow, forested valley along a small river, right in the..

Gotokuji Temple is a Buddhist temple from the Edo period that is believed to be the birthplace of the Maneki-Neko cat. The temple is located in Setagaya,..