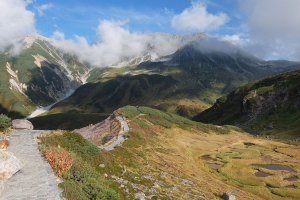 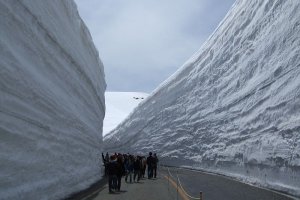 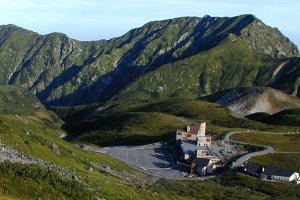 Opened in 1971, the Tateyama Kurobe Alpine Route is a mountain sightseeing road that connects Toyama and Nagano Prefectures. Despite being only 37 kilometers (23 miles) long, the route has several scenic stops along the way as well as hiking trails. From the top of the mountain, it’s even possible to see Mount Fuji on a fine day.

There are five different ways to traverse the alpine route, by funicular, bus, trolley, aerial tramways, and walking. It is important that no private transportation uses the route so that exhaust fumes do not harm the snow tunnels. During summer, shuttle buses also run between Toyama and Murodo.

Closed annually from December to mid-April for its deep and inaccessible snows, the main attraction of the Tateyama Kurobe Alpine Route is the scenery provided by the Tateyama Mountain Range, which is part of the Chubu Sangaku National Park. From mid-April to late June the snow corridor, a snow wall that reaches 15 to 20 meters high, becomes a visitor-favorite vista.

The rest of the year, the route remains a beautiful spot to see autumn leaves via the various hiking trails. And even offers a pathway to visit Kurobe Dam, which discharges water between late June and mid-October.

The Tateyama Snow Corridor is a giant snow wall that can reach heights of up to 20 meters. It is visible from April to June

This secluded station connects to the alpine route via trackless trolley and bus. It's a beautiful sight in any season.

Exceptionally beautiful and intimidating with its size, the Kurobe Dam expels water in autumn and makes for a great vista.

Toyama’s Yuki-no-Otani is open from around mid-April until early June. The walkway closed June 10th for 2012, but you can stil..

Toyama’s Yuki-no-Otani officially opens to the public in the spring, with snow walls approaching 20 meters in height.

The Tateyama Kurobe Alpine Route is an incredible and scenic route through the Northern Japanese Alps.

Why not review more places in Toyama?

Perched on the top of Tateyama's Oyama Peak is Oyama Jinja, once a flourishing center of Shugendō, the mountain religion o..

An unforgettable tour of the Japan Alps. Many waterfalls, hiking trails, breathtaking scenery, and multiple modes of transportation...