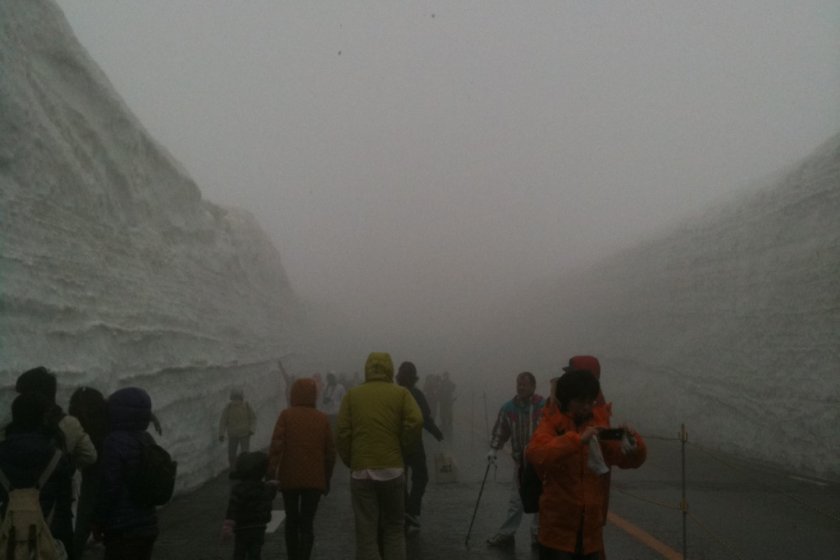 Touring meters and meters of snow

Here in yukiguni, or snow country, when spring finally comes into bloom and the endless snow that covered ricefields for a solid three months melts, it is time to celebrate the glorious awakening of spring with hanami parties and anything involving the great outdoors.

But as if to give winter one last sayonara, Toyama’s Yuki-no-Otani (Snow Wall) also officially opens to the public in the spring. Toyama is home to the Tateyama-Kurobe Alpine Route, a 3,000 meter-high mountain range stretching from the Tateyama Mountain Range to the Northern Alps of Japan. This area receives some of the heaviest snowfall in the country, and as a result, a snow wall approaching 20 meters in height is formed. From mid-April to late May every year, a walking and driving path is carved through the thick snow and open to the public for viewing. This area received an intense amount of snowfall this year, so it’s expected that the walls will be even more gigantic than normal.

Last year, on a sunny and warm May morning, I journeyed to the snow wall via bus as part of a group tour with Daiichi Tours, and it was one of my more unique experiences in Japan so far. After about an hour and half bus ride, half of which gets very windy as you get closer to the mountain, it was almost as if we were transported to a completely different world of snow, snow, snow and clouds.

After walking through Murodo Station where omiyage and various warm foods are sold, we entered the main snow wall walking route, which runs about 500 meters. Strong winds and thick grey clouds blanketed my view of the path but we continued to walk along the route. As I stood next to part of the giant wall, I looked up in awe. The size of the wall is generally impressive though it would have been nicer to see the wall on a clear day. Many people wrote messages in the snow or signed their names. Dozens of couples strolled hand in hand while several groups of friends gathered around various points of the wall to take pictures. The best way to get there is through an organized bus tour, and there are a few companies to choose from. More information can be found in English at the Tateyama-Kurobe Alpine Route Website (in English and Japanese).

Sheila Burt is a resident of Toyama prefecture, where she teaches English and blogs at www.sheilaburt.com. Prior to moving to Japan one year ago and falling in love with many aspects of Japanese culture, she worked as a freelance journalist for The Chicago Tribune, Time Out Chicago and other Chicago area publications. She loves learning about Japan and writing about the many nuances of life in a small Japanese town. 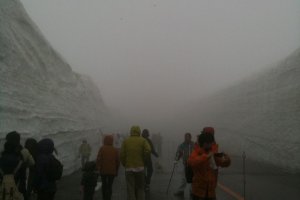 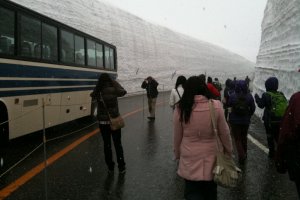 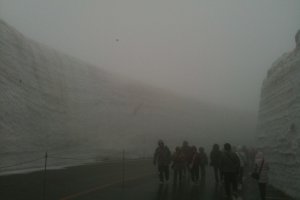