With fall just around the corner it is time to plan for a cool trip to the Japan Alps.

Our trip was so full of activities that I actually suffered a sort of jet lag when we returned home. Our first day was our own tour design to allow for hiking and leisure stops, and the second day was a Tateyama Kurobe Alpine Route tour.

From Toyama we boarded an early morning train to Unazuki Hot Springs. I called this train the Yellow Bus as it stopped at every station and picked up students on their way to school. In Japan, as with many other countries, the young people sit or stand with their cell phones texting away not aware of anything or anyone around them. I don’t blame them, as there was nothing to see until we actually arrived in the mountains. The ride was one hour and forty minutes on a single track that required waiting at intervals for other trains to pass in the opposite direction.

Once at Unzzuki Hot Springs, we boarded a small electric train for our tour of Kurobe Gorge. Along the route there were many beautiful scenes of mountain ridges, waterfalls, various bridges crossing the valleys, including a monkey bridge.

The first bridge was Okukane that was a bright red color with a nice view of the river and the station below.

Next we passed a mountain in the shape of a temple bell named Mt Higashi Kanetsuri that consisted of many blocks of crystalline limestone.

Further up, we crossed Atobiji Bridge, 60 meters high and 64 meters across. This is the steepest valley along this route.

Off to our right we could see Unazuki Dam with a very colorful arch reflecting off the lake. Even the Shin-Yangawara power plant was interesting as it was fashioned after a European castle.

Upon arriving at the last station, Keyakidaira, we began a hike along the river. For you onsen (hot springs) lovers there was one with a hotel way up the trail that you can only reach by foot.

We hiked for about three hours passed many waterfalls, scenic valleys, and even a natural tree in the shape of an owl.

Back at Keykidaira station I experienced black ramen for the first time. It was a bit salty but very tasty.

While waiting for our return train we were entertained by a couple of monkeys who eventually had to be chased away from the tracks.

The next day was full of weather contrasts. From Tateyama, we began our trip across the alpine mountains to Kurobe Dam. The mode of transportation included a bus, ropeways, cable cars, electric trolley bus, tunnel bus, and finally a train to Matsumoto.

The tour bus took us to Shomyo falls, the tallest in Japan. You need good walking shoes, as it is a considerable hike up to the falls viewing area. The fog had not yet lifted and it was difficult to take a good picture.

Next was a cable car to Bijodaira (1.3km), then a bus to Murodo (23km). This is the highest point of the trip at 2450 meters or a little over 8000 feet. There was deep snow, but we went ahead and hiked the walkway to Mikurigaike Pond.

From Murodo we boarded a trolley tunnel bus for the 3.7 km trip through Mt. Tateyama to Daikanbo. The buses were electric and originally used to carry the workers during the construction of the dam.

At Daikanbo you take a ropeway 1.7 km to Kurobedaira, walk through a tunnel and board a cable car, the only underground cable car in Japan. Now we are within .8km of the Kurobe Dam. This is the highest dam in Japan 186 meters high and 492 meters long.

At this point we had experienced rain, cold, and snow but finally the clouds disappeared for an excellent view of the mountains.

The next leg is another tunnel trolley bus 6.1 km to Ogizawa and finally a tour bus to Shinano-Omachi JR train station.

The trip across the Alps is well worth the time and money. Each stop you will experience a variety of scenery that is hard to describe other than the old standby words of spectacular, majestic, and breathtaking.

This one definitely warrants a return trip. The Tateyama Kurobe Alpine Route is open from April 16th through November 30th. 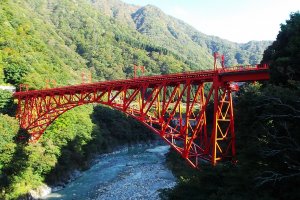 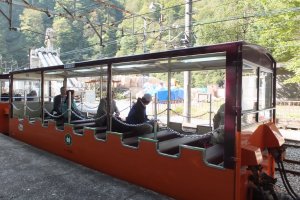 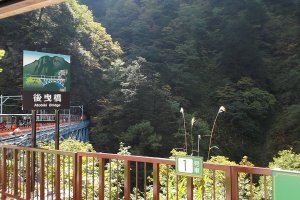 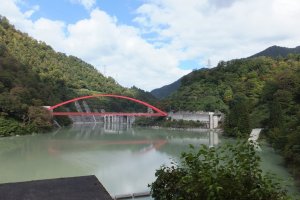 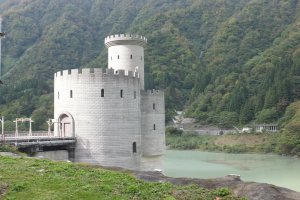 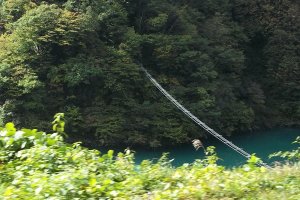