Over 50,000 azaleas to enjoy at this rural Saga gem

Daikozenji Temple in Saga Prefecture is a delight during the spring, in big part due to the azaleas covering the precinct. There are over 50,000 of them for visitors to enjoy in a space of around 75,000 square meters, and the best time to appreciate their beauty is from mid April through to early May.

If you can't make it during the azalea blooming season, the temple grounds are also a popular spot during autumn when the leaves are changing.

During azalea season, admission to the temple grounds is priced at 500 yen.

Daikozenji Temple is located around 10 minutes by taxi from Kiyama Station, served by the JR Kagoshima Main Line.

For those who plan to drive, there is a large paid parking lot which can accommodate up to 700 vehicles. There is a fee of 300 yen per regular vehicle during peak times (azalea season is included in this), but outside peak times the fee is only 100 yen.

Find out more about Daikozen Temple. 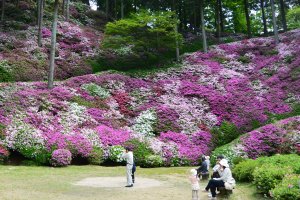