A special exhibition at the Urawa Art Museum

A special exhibition taking place at the Urawa Art Museum looks at the works of Alphonse Mucha (1860 - 1939), a painter and designer whose works were representative of the Art Nouveau movement. Around 550 of Mucha's works will be displayed at the event, including well-known commercial posters, books, magazines, postcards, stamps, banknotes, and even menus and product packages.

Adult admission to the event is priced at 620 yen, and no advance reservations are required.

The Urawa Art Museum is located a 7 minute walk from the West Exit of JR Urawa Station, served by the JR Keihin Tohoku Line, the Takasaki Line, the Utsunomiya Line, the Ueno Tokyo Line, and the Shonan Shinjuku Line.

For those who plan to drive to the museum, it is located around 9 kilometers from the Urawa Exit of the Tohoku Expressway. Paid parking is available in the basement of the nearby Urawa Century City Building. 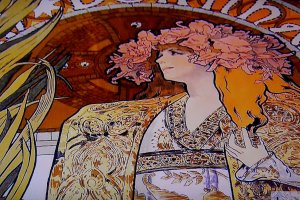