For thousands of red spider lilies

The Satte Higanbana Festival is a red spider lily festival held in Gongendo Park annually. Higanbana is one of the most common names for the spider lily in Japan. Satte's higanbana display is the second largest red spider lily display in Saitama Prefecture. The largest is the display in Kinchakuda in Hidaka City. In Gongendo park there are more than three million red spider lilies. The red spider lily has several names in both English and Japanese. One of the names in Japanese means "equinox flower". They are so called because they typically start to bloom around the Autumn equinox. They are quite a short lived flower, generally only lasting for about two weeks at the end of September.

During the period of the bloom, Gongendo park have a "higanbana festival". Additional events are organized and there are usually food vans at the park during the festival period. In 2020, the festival was cancelled, but the park was still open and the flowers were in bloom. Other parks, including the aforementioned Kinchakuda, actually cut down the spider lilies to prevent people coming.

By public transport: A bus goes from Satte Station on the Tobu Nikko line. Take the Asahi bus bound for Goka Machi Yakuba and alight at “Gongendo” bus stop, which is on the south end of the park.

By car: The park is about a ten minute drive from the Satte Interchange of the Ken-o expressway. The main car park is open all year round. The higanbana festival in Gongendo park is very popular so they open additional parking lots during the period of bloom. 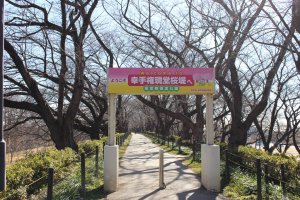 Elena Lisina a month ago
This flower looks great, I like it!
Reply Show all 2 replies

Lynda Hogan Author a month ago
Its such an unusual flower. The scene in Hidaka is often listed in lists of Japan's top scenes. But any large display of Higanbana is really beautiful.
Reply

Elena Lisina a month ago
I like even one single flower!
Reply
3 comments in total