Cycle Trip from Kyoto to Shigaraki

I really love cycling through the Japanese countryside! Honestly, you can see so much more from a bicycle than you can from a car.

After a friend took me to Shigaraki for the first time in her car, I decided to try and cycle there. On my first attempt I became completely lost and ended up going to Ujitawara instead.The morning of my second attempt in early May didn't look too promising. Dark clouds threatened rain, and so did the weather report. I hummed and hawed until it was almost too late to set out, but finally I decided to risk it. As I approached Ishiyama I decided to try for a shortcut. My shortcuts almost never work out, and it turned into an interesting exploration of Ishiyama's back streets. Eventually I found my way to the Seta River and cycled past Tachikannon Temple the crossed a bridge, following Highway 22.

The stretch of road along the Seta River is very beautiful, but after the bridge the road departed from the Seta River and follows the Tomi River, a small rocky river with some pretty waterfalls along the way. I stopped to explore at one point, and was really glad I did. I followed a track across the river and a short distance up the hillside, and found some impressive rock carvings.

The road took me through rolling hill country, but the ups and downs were not too difficult. Wild wisteria sprawled through tree tops, and thick, dark brown shoots thrust their spears up amid the bamboo. Presently the green wilderness on either side of the road gave way to plantings of tea, rice in newly flooded fields, and fruit trees. At Asamiya near Shigaraki there are many tea plantations, and it was my first really good look at Japanese tea growing.

At last I saw a sign that said Shigaraki River, accompanied by one of Shigaraki's iconic tanuki statues. Since it was already 4:30 in the afternoon, I was relieved, but it took another 10-15 minutes of cycling before I reached the town center. I was a bit worried about cycling home in the dark, so I just took a quick look around, snapped a few tanuki statues, and then realized that I lost my sense of direction. I rode around looking for but not finding any signposts, then did the smart thing and asked for directions. I decided to return home via Uji. It rained a little on the way, but nothing to worry about.

The distance between Ishiyama and Shigaraki is about 25 kilometers. From my home in Kyoto, I guess the round trip was about 70 kilometers - not a bad day out! 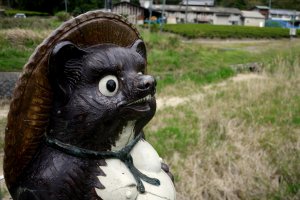 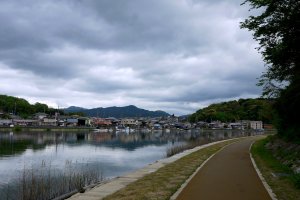 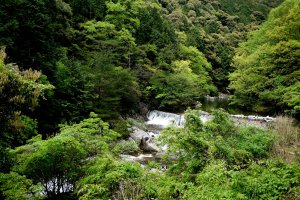 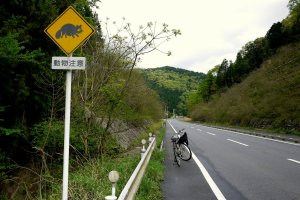 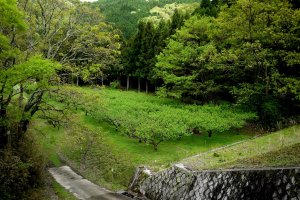 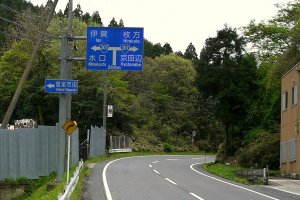 Bonson Lam 7 years ago
I would love to visit the Ninja houses and Iga, as well as Minaguchi Castle. There are also lots of tea farms nearby. I can imagine it would be beautiful with the fresh shoots!
Reply Show all 0 replies

Bonson Lam 7 years ago
Hi Cathy, your slightly scary photo caption that said "Iga is that place with Ninjas" got me thinking. Did you see any Ninja yashiki (ninja houses)? The photo also had a sign of route 307 going to Minaguchi. Is that a busy road?
Reply Show all 1 replies

Cathy Cawood Author 7 years ago
Hi Bonson, Route 307 certainly wasn't busy that day... but I think it was a weekday. A lot of people traveling in Shiga would use the big highways, so maybe it doesn't get busy, but I can't say for sure. I didn't go to Iga, or see any Ninja Houses, but one of my friends has been and said it was really good. Are you planning a trip?
Reply

Pei Jun Liao 7 years ago
Amazing! l'd love to try something like that one day too! But weren't you worried while travelling around alone, on a bicycle no less?
Reply Show all 1 replies

Cathy Cawood Author 7 years ago
Actually I realized that after I started doing day-trips and longer trips, one benefit was a huge boost to my self confidence. Things could go wrong (rain, a flat tire, maybe even an accident), but things go wrong even when you stay home and never have any adventures. Whatever goes wrong, I can deal with it, and cycling helped me realize that.
Reply

Cathy Cawood Author 7 years ago
My cycling trips have been the most enjoyable - and memorable - travel experiences I've had. I hope you try it soon!
Reply

Cathy Cawood Author 7 years ago
I agree! Very scary! Real Tanuki look quite different. They are a bit like small foxes with short legs, except they are dark brown.
Reply
13 comments in total