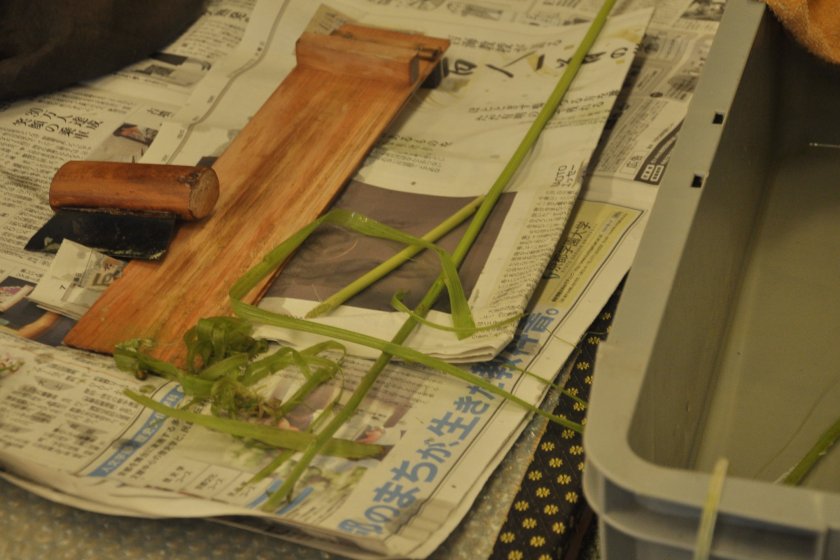 Hemp, one of the raw materials used at Omi-jofu

The Omi-jofu Traditional Crafts Center is located in Notogawa town in Shiga Prefecture. The center prides itself on using the most traditional handicraft methods to produce their products, which range from clothes and hanging curtains to purses and tablecloths.

Omi-jofu literally means textiles made from hemp and ramie, a type of grass in the nettle family which the owner of the shop grows in her own garden. The climate around Notogawa is perfect for the cultivation of both grasses. Water flows from the surrounding mountains and into the lowlands of the Notogawa area before passing into Lake Biwa. The fresh mountain water supports the growth of the plants, both of which grow to more than two metres high by June and July. The sizable summer harvest allows the workshop to continue their production through the winter months.

After removing the leaves upon harvest, the outermost layer of the trunk is a hard material that can be processed into a durable yarn. Although it is thin, it is very hard. The yarn is then weaved together to become cloth. I had a chance to experience using the traditional weaving machine, a contraption made entirely of wood by an acquaintance of the shop owner. I was all thumbs with this machine, as many different parts of it have to be controlled at the same time. It is the skillful coordination of your hands, feet and waist that make it work. Fortunately with the help of an experienced assistant, I managed to thread in two horizontal lines. An experienced worker could produce approximately five meters of woven cloth a day. You can imagine how much effort it requires to produce a whole dress.

The subsequent dying process is basically divided into two types - either cloth that is dyed before it is woven or, the opposite, cloth that is woven before being dyed. When the cloth is dyed first, the color is softer and more natural in appearance, with the cloth holding onto the color longer as it ages.If the cloth is dyed after the weaving process, the color is much stronger; yet it doesn't last as long as the former method. Some products only have their vertical threads dyed, some only their horizontal threads and some have both horizontal and vertical threads dyed. It is quite impressive to see that intricate patterns can be produced even with only one direction of colored thread. Of course, dying the cloth in both directions is the most difficult and time consuming. A number of products have white patterns or pictures on them, which is the result of bleaching. The bleaching process is done after the weaving process.

In conversations with the staff, I learned that this kind of traditional handicraft has had little success in attracting younger followers. The shop and nearby factory I visited are fortunate enough to have government support, unlike the other five factories within their association, whose products as a result are mostly machine-made. Using machines is undoubtedly faster, cheaper and requires less manpower. In contrast, Omi-jofu experiences numerous difficulties maintaining its mostly traditional production methods. According to the owner of the shop, although she would like to have more people learning the traditional skills, she would only want the factory itself to be designated as national treasure. She is afraid that if the skills themselves are officially recognized by the government, when government policies changes, Omi-jofu would have no choice but to follow suit. Such a apolicy could risk altering certain traditional methods and eventually result in a complete loss of particular skills. She emphasizes that if the skill is recognized as a national treasure, it would be like being kept in a box and put inside a museum. There would be no more development. The culture would cease to be “living”.

As a student of heritage studies, I found it very interesting to ponder this dilemma involving politics and the development of local cultural policies. The question remains, however, how best to encourage people to cherish their cultural assets and how they can use their cultural elements to identify themselves. It's a topic that concerns not only traditional linen productions, but furthermore the future of other protected structures as well as intangible cultural heritage in Japan. 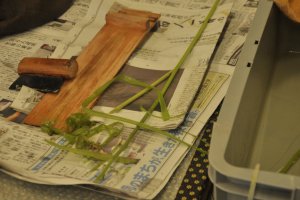 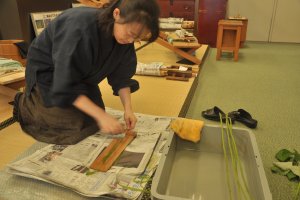 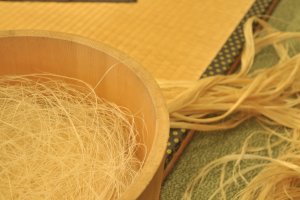 Kim a month ago
Such an interesting read! I just checked out the official website too - keeping it in mind for the next time I'm in the area!
Reply Show all 0 replies