Experience Awa-Odori dance throughout the year

Tokushima's Awa-Odori Festival is one of Japan's biggest and most famous festivals with a history of 400 years. People in traditional costume perform folk dances in the streets. The wildly popular festival only takes place once a year over 3 days in August. However if you come to Japan at some other time of year, you don't need to miss out entirely. Instead you can go to the Awa-Odori Kaikan Hall.

Awa-Odori Kaikan was created to promote the Awa-odori Festival, the traditional folk dances, and to entertain visitors to Tokushima. The five floor building is located at the foot of Mount Bizan.

The first floor functions as an information center. You can pick up brochures and pamphlets about Tokushima there, and you can also shop for souvenirs and local delicacies in the 'Arudeyo Tokushima' store. You can also rent bicycles here for exploring the city.

The second floor holds the concert stage, where Odori performances are held throughout the day. More about that later. There is also a free library with literature related the festival and the dances. I didn't check out the library because I assumed it would be all in Japanese.

On the third floor there is a museum with displays of dance costumes and instruments and so on. If you want to have a go at dancing, there is also an area with video instruction where you can try it out. Sounds like fun, doesn't it?

The fourth floor is rental space for conferences or dance practice, but the fifth floor is home to the rope-way station for the top of Mount Bizan where you can enjoy a splendid view of the Tokushima Plains. The city lights make the view especially beautiful at night. The fifth floor also has a small restaurant.

The main reason I went to the Awa-Odori Kaikan was to attend a dance performances. The dancers were a group named Awa-no-Kaze, who only perform at the Awa-Odori Kaikan. They performed a number of dances, and each of them was different and interesting. I absolutely love the sound and feeling of Japanese folk music.

For a grand finale, they picked people from the audience to go up on stage and learn a dance. Possibly because I was the only foreigner there at the time, they picked me out first. They gave me a harumaki cloth to tie around my head. I was freaking out a bit because I have absolutely no sense of rhythm, but the atmosphere was so friendly and fun that it wasn't too bad. They must have been really great teachers, or else there was magic in the music, because I surprised myself. I actually danced reasonably well, and it was so much fun!

By the end of the performance almost everyone danced. It was a wonderful experience, and made a very special memory of Tokushima. I hope I can go to the Awa-Odori Festival one day. 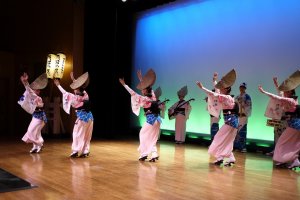 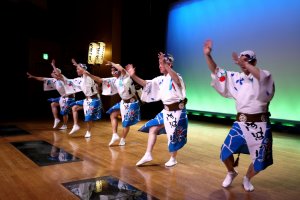 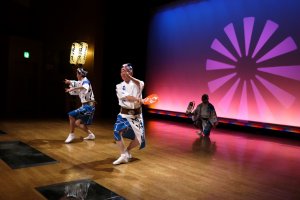 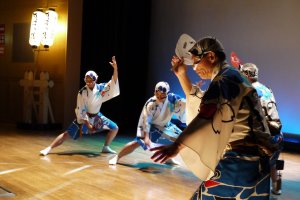 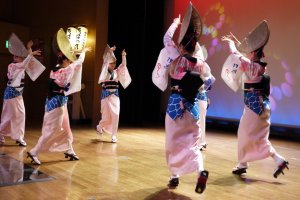 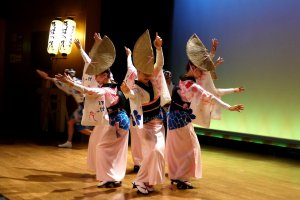